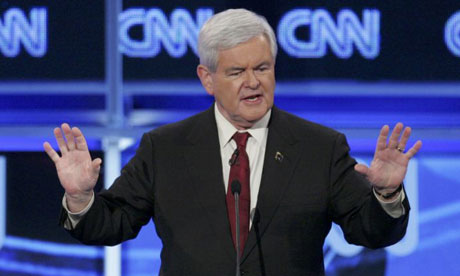 I’ve watched the vast majority of the GOP debates during this primary season. I am not a party member, but I do hope to find a major party candidate I can vote for this election cycle. I’m not sure why, but I fear being apathetic in my misfit politics. I am willing to vote for a single issue, so long as it can be actualized in the form of a policy change that has real implications for real people, people I know.

Right now, as I see it, that issue is immigration. The Dream Act has been around for some time and has a history of support on both sides. In the current, nativist climate of the Right, it would be hard to pass something like this if it came from the Left. But it is equally hard to find a Republican willing to stand by it.

Newt Gingrich struck a deeply moderate (too moderate for my own, personal fancy) but humane chord on what to do about immigrant families who have roots in the US. He offered a hybrid idea of “legality without citizenship” that would avoid family separation and mass deportation. Quickly condemned by Romney, Bachmann and others who resorted to the usual rhetoric de jour, Gingrich stood firm. He said:

I do not believe that the people of the United States are going to take people who’ve been here for a quarter of a century … [and] separate them from their families and expel them. I’m prepared to take the heat in saying: Let’s be humane in enforcing the law.

I was shocked. Newt has been the most well-informed and least scripted or predictable candidate in these debates, but I’ve never appreciated him as a possible candidate. Although Huntsman strikes a refreshing tone to me and Paul’s anti-war position is deeply appealing too, Gingrich’s performance last night filled me with a new sense of hope. At the moment when he had the most to lose, at the time when his status in the fickle polls was surging, Newt stood for a simple—and deeply Catholic— truth: to be the so-called “party of the family,” one cannot uproot US immigrant families. The law must be enforced and applied in a humane way.

Obama has been vocal about supporting the Dream Act, but he has failed to push it through. He has failed to make it a major issue during his term. Gingrich strikes me as someone who would actually work on this in a concrete way. By the way: I’ve come to learn that Gingrich has held this basic position consistently throughout his political career.

Voting in US elections is always a tragedy. In the classical dramatic sense: the political options presented are deeply imperfect, unideal but not totally equivalent. I will not call my position a “Catholic option.” Rest assured: I’ll be holding my nose on many, many other issues. Although I never thought the day would come, even though I’ve never imagined myself enthusiastic about an establishment Republican (or Democrat), I find myself—perhaps for the very first time—willing to consider rallying behind Newt Gingrich.

I come to this whole issue from a place of deep, personal concern. Here’s part of that place:

My college recruits top-notch students who cannot go to public institutions because of their status as undocumented. These are students who have lived in the US since their early childhood or infancy. Upon graduation, these bright students will receive a quality degree from a fine liberal arts college. But they will not be able to use that diploma in the marketplace. They will be  schooled, widely read, well prepared young men who will be unable to work, study, and live in this country as their peers do.

At Wabash College and many other privates colleges and universities, undocumented students are being given separate but equal treatment. This is intolerable. It keeps me up at night. I feel helpless as a person and, especially, as a teacher—their teacher. I am prepared to what I can, even at the expense of other, more abstract (to me at least) issues.

If Newt Gingrich will champion their cause—and can win the nomination by doing so—then, this November, expect me to be campaigning for my man Newt and, for the first time ever, voting for a major party candidate, a Republican to boot!

November 23, 2011
The Black Iron Prison of the Self
Next Post

November 23, 2011 Reflections on Population Increase (Part I)
Recent Comments
30 Comments | Leave a Comment
Browse Our Archives
get the latest from
Vox Nova
Sign up for our newsletter
POPULAR AT PATHEOS Catholic
1

A Response to the USCCB's Dangerous...
Steel Magnificat
Related posts from Vox Nova