Hearing the eulogies of Senator John McCain given by former presidents George W. Bush and Barack Obama, my foremost thought was, “Oh yeah, this is what normal leaders sound like.”

Naturally, I took exception to the exceptionalism in their speeches. When they each mentioned the dignity of all human beings, without exceptions and beyond borders [!], I heard the asterisks as clearly as their words. And still I thought, “Oh yeah, this is what it feels like to take exception in a politics-as-usual sort of way.” 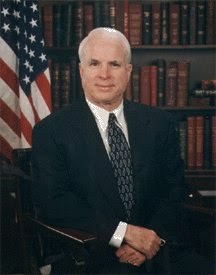 ain himself (may God have mercy on him), I have no particular wish to lionize him as a saint or even a hero. On some things, including certain principles he is being widely praised for, he was, from a Christian standpoint, profoundly wrong. He embraced the nationalistic doctrine of American exceptionalism that is an immovable prerequisite for election to any federal-level public office (whether it be of the interventionist or isolationist variety). More specifically, he shared the idolatrously messianic, city-on-a-hill, last-best-hope, militaristic exceptionalism espoused by both of the erstwhile political rivals eulogizing him, among many others.

That said, I do see him as part of a vanishing generation of legislators with some notion of, and interest in, how bipartisan legislation is supposed to work. And I’ve always appreciated his clear and consistent opposition to torture, likely influenced by his own experience as a prisoner of war. I will always and everywhere blaspheme the national quasi-messianic doctrine that going to war is a heroic thing, but to remain resolute against such a stark offense to human dignity as torture, at some political risk, does require at least a modicum of virtue.

This is as much as I have to say about the good, the bad and the ugly of the late senator’s legacy. It’s just good to be reminded occasionally – and McCain’s death has become such an occasion – what normal politics looks and sounds like. Not idealized, not holistically principled, not perfectly harmonious – just normal.

Because the current situation is not it.

August 24, 2018
To Treat the Cancer of Clerical Sex Abuse
Next Post

September 3, 2018 In honor of those who work
Recent Comments
0 | Leave a Comment
Browse Our Archives
Related posts from Vox Nova