In honor of those who work

One of my favorite poems is African-American writer Robert Hayden’s frequently anthologized “Those Winter Sundays.”

Sundays too my father got up early
and put his clothes on in the blueblack cold,
then with cracked hands that ached
from labor in the weekday weather made
banked fires blaze. No one ever thanked him.

I’d wake and hear the cold splintering, breaking.
When the rooms were warm, he’d call,
and slowly I would rise and dress,
fearing the chronic angers of that house,

Speaking indifferently to him,
who had driven out the cold
and polished my good shoes as well.
What did I know, what did I know
of love’s austere and lonely offices?

This poem resonates with me because it is essentially my story, minus the lack of central heating. For nearly half a century my father worked as a steelworker for the Bethlehem Steel Corporation’s outpost in Buffalo, New York. He was an extremely diligent worker; even when Buffalo was pummeled with one of its infamous snowstorms, He worked all three shifts, sometimes during the same week; he generally worked on weekends and would have two separate days off during the week. For a brief period when he feared losing his job, be took a second job for the U.S. postal service.

My childhood was punctuated with warnings not to wake him in the mornings when he’d just come home from working nights, with lonely evenings finishing my homework after my mother had gone to bed and he had not yet come home from second shift. Like the speaker of Hayden’s poem, I considered it normal that he sometimes got up early for work on Sundays; I accepted that often it would just be mother and me at the nine o’clock children’s Mass. I also got used to not planning too far ahead, knowing that we might not know until the last minute if he would have the day off, accepting that he might miss all but my most important school activities.

Like the father in Hayden’s poem, my father expressed his love for me in actions rather than words. Sometimes, they would be small acts of charity, like polishing my shoes or, more recently, painting over a scratch on my car. But the biggest gift was working hard so that I could grow up with privileges one does not usually associated with the children of blue-collar workers: thirteen years of Catholic school followed by financial support for an education at a private liberal arts college. People who meet me today are sometimes surprised that I, a white-collar worker who has lived in six countries and travels frequently, was raised in a working-class home. Admittedly, the reality is a little more complex – my father’s own parents were upper-middle class professionals, a dentist and a pharmacist. But when they unexpectedly fell on financial hard times while he was a high school student, he willingly embraced downward social mobility, foregoing a college degree in favor of a stable and well-remunerated industrial job.

Now retired for nearly ten years, my father still takes pride in the work he did. However, as a naturally curious person who loves science and history and who took some college courses when he could find the time, he regrets not finishing a degree. I have benefited greatly from the sacrifices that he and my mother, who quit her job as an administrative assistant to stay home with me, made throughout my childhood and youth. As much as I might stress over piles of ungraded papers or the constant stream of meetings, my life is one of comparative leisure. Nevertheless, taking inflation and other factors into account, I earn roughly the same amount that my father earned at my age, for doing work that involves no manual labor and is comparatively easier than anything my father did.

And this leads me to a very naive question that I nevertheless cannot resist asking. Why is it that the people who do the hardest, dirtiest, most dangerous, and most essential jobs are paid the least? Indeed, a century and a half ago under the US slave system those who worked in the fields and raised the children of plantation owners were paid nothing at all. Today, those who grow our crops, tend and slaughter the animals we raise for meat, stock shelves in our grocery stores and wash dishes in the restaurants where we go to enjoy a Friday night treat are often undocumented workers who earn less than the legal minimum wage. How did we get here, and what might those of us who hold power do to change this grossly unjust and oppressive system?

This is a question that obviously cannot be answered in a few thousand words by an English professor with class-based guilt. And unfortunately, if we look at the last thirteen thousand years of human civilization, the reality looks grim. The history of agriculture-based civilization has been one of drastic inequality and social stratification and deliberately planned oppression. Though the Industrial Revolution increased global affluence and arguably raised living standards around the world, it did not bring about equality (or even equality of opportunity) in either its capitalist or communist offshoots. In the West, the social Darwinism of the nineteenth century made the argument that there would always be haves and have nots. Nevertheless, many individuals and groups – including our own Catholic Church – resisted this idea, stating again and again that we cannot have peace without justice.

While humans may be naturally competitive due to our basic self-preservation instinct, many scientists are quick to point out that we are also naturally cooperative. The general scientific consensus is that, before the invention of agriculture allowed for specialization of various work tasks, differentiation of social roles, and the ultimate rise of kleptocracy, our hunter-gatherer human ancestors lived in relative equality. Faced with constant threats from a harsh natural environment, small bands of hunter-gatherers had to work cooperatively. While there was a differentiation among gender roles – with men primarily hunting and women and children primarily gathering – the basic social structure was egalitarian.

Most of us would agree that, barring a major disaster coming to wipe out our infrastructure and decimate our population, we are not going to return to hunting and gathering anytime soon. But as our global population continues to increase, as we all become more and more interdependent while still maintaining fragrant disparities of resource distribution even within the affluent Global North, more and more people are realizing that we need to collaborate and share if we are going to survive. Inspired by Catholic Social Teaching as well as the anarchist movements of the early twentieth century, the Catholic Worker Movement, though small in scale, offers a challenge to all of us.

Catholic Worker houses of hospitality, which invite the homeless to share a dwelling space with volunteers who have willingly renounced certain trappings of conventional middle-class society, create families that transcend bloodlines, thus challenging the capitalist idea of the consumerist nuclear family as the basis for society. Catholic Worker farms, which try to practice careful stewardship of land, a disavowal of unjust systems of food production and distribution, and an embrace of both manual and intellectual labor as necessary for our development and fulfillment, stand as models for all of us. “Don’t call me a saint,” Catholic Worker co-founder Dorothy Day famously said. In her view, the Catholic Worker way was not meant for the pious few, but for all.

A similar attitude to this can be seen in another social change movement that at first glance might seem to lie at the exact opposite of Catholic Worker: the effective altruism movement. Largely led by young scientists, engineers, and financial professionals and inspired by a utilitarian ethic, this movement is focused less on systemic change than direct charity, embracing the idea that those with the most wealth should voluntarily give it to those with the least – not just within a country, but on a global scale. Over the past eight years, effective altruists have argued that those of us in wealthy countries should work within the capitalist system to earn large amounts of money and then share it with those people – largely in sub-Saharan Africa – who do not have the ability to do so. Though the atheist, utilitarian philosopher Peter Singer, who is effective altruism’s most famous proponent, might seem worlds apart from Catholic Worker co-founder Peter Maurin, they probably would both agree that if you have two coats, one of those coats rightfully belongs to someone else.

I will be the first to say that my level of giving does not even come close to that prescribed by the two aforementioned Peters; I perpetuate unjust systems as much as any other middle-class American does. Indeed, all people who enjoy privilege find it hard to give it up. No matter where we are on our journey, leaders of movements such as Catholic Worker remind us that we can always do better. For me, this is a day to think about the people who built the house I live in, who harvested, packed and shipped the blackberries I ate this morning, who made the dress and shoes I’m currently wearing, who extracted and processed the oil that runs the car I drive. What would they ask of me if I were to meet them? At the very least, they would ask for a living wage, food, comfortable living and working conditions, and safety for their families. They also ask for opportunities to learn, grow as individuals and communities, and express themselves through cultural activities. All of us who have enough leisure time and energy to read and write in a forum such as this have been given a lot. This is a day to think about the fruits of our own labors, to ask what we truly give to others and how we might give more. 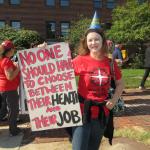