The Season of Our Longing

There is always something about Advent that appeals to me deeply. Maybe, I’ve sometimes thought, it’s something about the sense of a fresh start as we begin a new liturgical year. It may also have something to do with the fact that it was close to the beginning of Advent when I first began attending Mass regularly, and thus I have loved Advent ever since I was coming to love liturgy. Maybe Advent simply appeals to my craving for structure with its seasonal pattern of anticipation and culmination.

There is definitely some truth to all of these explanations. But I’ve realized that the more fundamental reason Advent resonates with me is because it represents irresolution.

This is not to say that irresolution itself appeals to me, but quite the contrary: I have always been profoundly uncomfortable with it, and I have often found myself frustrated by the ways my adult life has seemed to be marked by irresolution in one form or another. And that’s just it: most years I experience Advent as something of a relief, because it is a time when the liturgy truly expresses how I feel.

I once heard a television producer, talking about ending a show’s story line, point out that in fact nobody gets a final resolution in life until they’re dead – a thought I find strangely comforting, yet at the same time discouraging. I can’t honestly say I’ve made peace with irresolution or learned to be content with it, and any attempts to convince myself that I have ring hollow. But Advent, by speaking to the irresolution, validates it. By infusing it with meaning beyond itself, it helps me to live it.

Some longed-for resolutions in this life may never come. And that’s why we need eschatology, our hope of the ultimate resolution. And so we wait – sometimes in joyful hope, sometimes in pain and frustration, but always with a longing that cries out for fulfillment.

Over the years I have found choral singing to be a profound source of personal sustenance, one that has seen me through multiple dark seasons. Some things I find easier to believe when sung, and sometimes hope feels truer in a minor key. So I conclude with a piece I once sang in a church choir during a previous season of frustrated waiting, expressing the bittersweet longing present in the hopeful cry of John’s Revelation:

E’en so, Lord Jesus, quickly come, / And night will be no more. / They need no light nor lamp nor sun, / For Christ will be their all.

Amen. Even so, come, Lord Jesus. 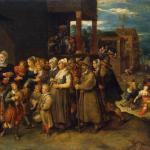 Catholic
A Litany of Saints for Peace, Life and...
Vox Nova

Catholic
Holding Hands During the Our Father: A Bad...
Vox Nova