As Guest, As Brother: Verse for Advent

As Guest, As Brother: Verse for Advent December 18, 2018 Mark Gordon

Of all the liturgical seasons, Advent is uniquely colored by mystery, longing, and paradox. It is therefore the season most susceptible to the power of poetry, a form far more capable of channeling these three movements than prose. As Madeline L’Engle writes in her Advent poem, After Annunciation, “This is the irrational season / when love blooms bright and wild. / Had Mary been filled with reason / there’d have been no room for the child.” In this poem, On the Mystery of the Incarnation, the great 20th Century poet Denise Levertov confronts the strangely mysterious, even irrational, and most certainly paradoxical belief that God became one of us.

It’s when we face for a moment
the worst our kind can do, and shudder to know
the taint in our own selves, that awe
cracks the mind’s shell and enters the heart:
not to a flower, not to a dolphin,
to no innocent form
but to this creature vainly sure
it and no other is god-like, God
(out of compassion for our ugly
failure to evolve) entrusts,
as guest, as brother,
the Word. 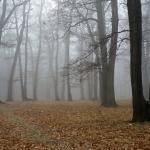 December 14, 2018
He Comes in the Silence: Verse for Advent
Next Post

December 25, 2018 Merry Christmas and Thank You for your Support
Recent Comments
0 | Leave a Comment
Browse Our Archives
get the latest from
Vox Nova
Sign up for our newsletter
POPULAR AT PATHEOS Catholic
1

Catholic
He Comes in the Silence: Verse for Advent
Vox Nova