The King of the Birds, or Easter is a Peacock

Vox Nova is pleased to welcome a guest post by Leanne Ogasawara.

Joan Didion had it right when she said life in Los Angeles has an apocalyptic quality. She wasn’t just talking about earthquakes and fires that strike like lightning, but we have demon winds that howl in autumn and winter rains that can cause mountains to slide into the sea. She wrote of sleepless nights with “peacocks screaming in the olive trees.”

In Pasadena their shrieks can surely wake the dead!

But that happens in spring, during mating season, when the peacocks become desperate in their longing.

Did you know Flannery O’Connor lived on a farm, where she had forty beaks to feed? She loved her peacocks, calling them the king of the birds. This wonderful infatuation began when she was five–captured on film with chickens–and it developed from there. No matter how her family complained, she remained firm in her devotion.

Recently re-reading her essays in Mystery and Manners, I learned that the Anglo tradition is very different from the Indian one, when it comes to peacocks. The Indian tradition views them as symbols of love and beauty, while the European tradition associates peacocks with vanity and pride. This notion stretches all the way back to Aristotle, who remarked that, “Some animals are jealous and vain like a peacock.”

I used to feel the same about peacocks–that is, until a pride of peacocks (in this case five females and three males) moved into our neighborhood last year. And you know what? The more I came to watch our peacocks here in Pasadena, the more I am sure that the Indian tradition has it right. They are wondrous and enchanting. Especially when the males display and dance underneath an iridescent galaxy of radiating suns (like Indra’s Net?) in the brilliant California sunshine. Turning round and round, displaying their “underpants” (as Flannery describes it) shaking and rattling their quills–they are more beautiful than a rainbow when they dance.

Yet looking around, the peahens always seem utterly nonplussed by their strutting.

Been there, done that…?

I know I’m not the first person to have been surprised by their hideously ugly feet. Scrawny chicken legs and that God-awful shrieking–ke ka ke ka ke ka — over and over as they turn round and round, rattling their quills like lunatics.

Oh, my beauty, how did you lose your golden voice? And where did you get those chicken feet?

A devout Catholic, Flannery O’Connor was well-aware that in the Christian tradition, the peacock is a symbol of eternal life and the resurrection. The ancient Romans believed that peacock flesh would never rot. Augustine of Hippo would later test this in Carthage, noting that, “A year later, it was still the same, except that it was a little more shriveled, and drier.” 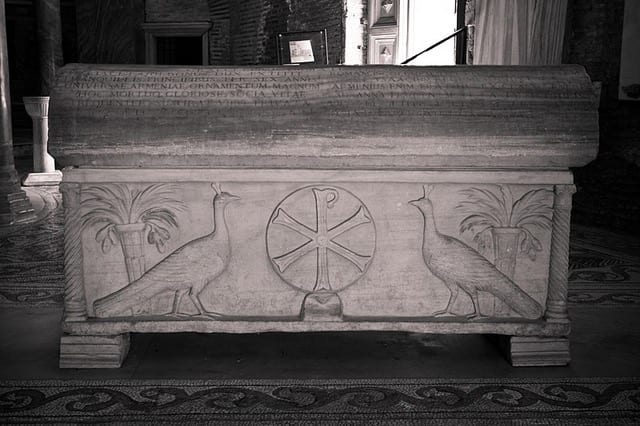 Because they molt in autumn with their feathers coming back in the spring, peacocks came to represent resurrection and the Reborn God. Spring. And Easter. This is why you can spot them in Christian artwork from mosaics and reliefs in the basilica of San Marco to depictions in Renaissance paintings by Antonello to Fra Angelico and Fra Filippo Lippi. And just like in ancient India, Europeans of the Middle Ages believed that peacocks could kill poisonous serpents. 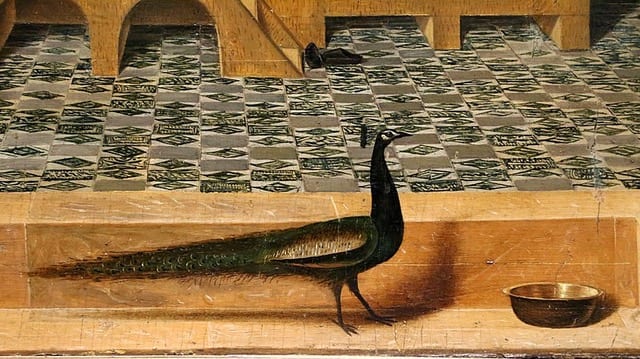 “You shall know the truth,” said Flannery O’Connor, “And the truth shall make you odd.”

This is one of my favorite quotes by Flannery. And she was odd. But peacocks are odd too. It should not surprise you that guarding the gates of paradise at her Georgian farm named Andalusia was an ostentation (yes, that’s the word!) of peacocks. So numerous were they she didn’t dare count them; for a she explained, “I intend to stand firm and let the peacocks multiply,” she said, ending her essay “The King of the Birds” saying, “For I am sure that, in the end, the last word will be theirs.”

And so it should be. 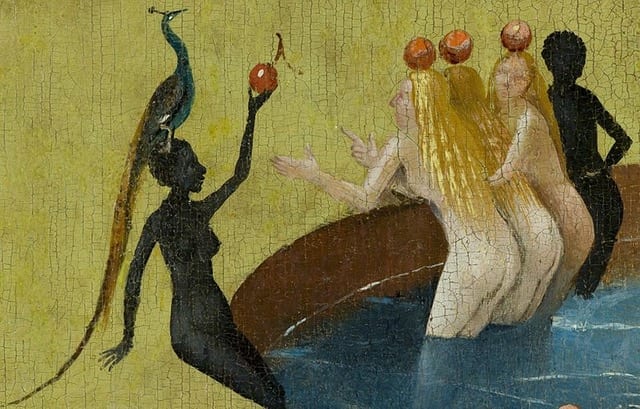 Leanne Ogasawara has worked as a translator from the Japanese for over twenty years. Her translation work has included academic translation, poetry, philosophy, and documentary film.

April 8, 2020
The Paschal Mystery is as true as ever
Next Post

May 30, 2020 Racism is the water we swim in
Recent Comments
0 | Leave a Comment
"Very late to this article, but is there somewhere in Catholic theology that states this?"It ..."
David Larson On the Conscience and Our Response ..."
"Are you Jeannine Pitas?"
Hubert Rinse It’s More Complicated Than That
"This is such an important topic. We as a nation have to admit when solutions ..."
Melanie Beasley Lies, Damn Lies, and Profit Motives
"Oh dear stars these translated words.....dont make any sense aaaaaaa thanks for translating.ZH.G1269.US/c5119Y"
Spirit1299 If Christ is our only King
Browse Our Archives
Related posts from Vox Nova

Catholic
The Paschal Mystery is as true as ever
Vox Nova

Catholic
On the Temple's Destruction and the Search for...
Vox Nova
TRENDING AT PATHEOS Catholic