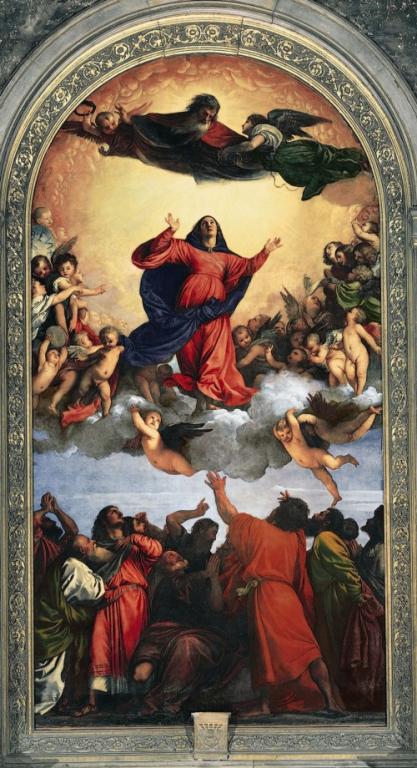 It started off as another failed art pilgrimage.

When I told our tour guide on our first day in Venice that I had come to see Titian’s masterpiece, her face fell.

Oh, I am sorry to be the one to tell you this, but the picture is being restored.

When she saw the look on my face, she quickly added, They have a wonderful reproduction in its place though.

Well, they did have a wonderful reproduction. In the two-dimensional digital photograph, at right, you probably can’t tell that it is a reproduction. If she hadn’t told us, I might not have noticed!

Still, I was bitterly disappointed.

Rightly considered the great masterpiece of his early period, the Assumption of the Virgin ordinarily hangs in the place for which it was created; in the high altar of the Basilica di Santa Maria Gloriosa dei Frari. Known affectionately in Venice as “the Frari,” the basilica was consecrated the same year that Columbus arrived in the Americas. A great barn of a church, it looms almost too large for the small parcel of land to which it has been given. A wealthy and vital monastic center at the heart of Venice, it is perhaps most famous for the works of art it displays in its cavernous interior.

Early in his career, Titian was commissioned to create a painting of the Virgin for the high altar. 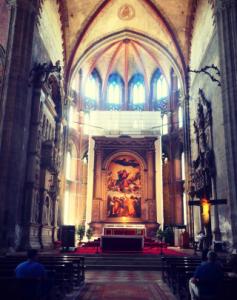 It was for this that the church was named: this moment when Mary was “assumed” up to heaven. That Mary was born Immaculate was a belief of the Franciscans. Although bitterly contested by the Dominicans for centuries, it had been sanctified as doctrine by the Franciscan Pope Sextus IV in 1477. In the painting, we see the moment when Mary–depicted as a young women– is assumed to heaven, where she is crowned Queen.

Created on twenty-one cedar panels joined together by sixty walnut pegs, the seven foot tall painting is installed over the altar in the frame for which it was created. The Frari is unique in having one of Italy’s only surviving intact choir screens, and the arch of the screen serves to wonderfully frame the work again. So, when seen from the far end of the nave, the picture appears strikingly to be double framed.

I was intent to see this work, considered by the sculptor Canova as, “the greatest painting in the world;” and by Ruskin –cryptically –as being one of the few pictures which are truly religious. 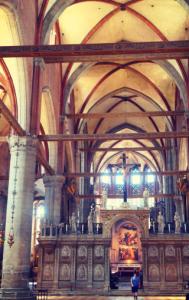 In the swirl of the miracle–a spiraling swoosh by which Mary is raised up to heaven to the amazement of the apostles standing below, people have imagined they could hear music. British poet Arthur Symons described the work as being a “symphony of color… a symphony of movement.. a symphony of light without a cloud–a symphony of joy in which the heavens and earth sing Hallelujah.”

And the legendary art historian Bernard Berenson declared the angels to be “Embodied joys, acting on our nerves like the rapturous outburst of the orchestra at the end of “Parsifal.”

So, I had traveled to Venice not just see the picture –but to hear it, as well.

We had chosen to stay in the Cannaregio district, not five minutes from Titian’s house.

Born in the mountains to the north of Venice, Titian spent most of his life in Venice, just a stone’s throw from the Fondamenta Nuove, where today’s Venetians catch the vaporetti –water buses–going to the outlying islands. Nowadays, the house where Titian lived is humble, behind walls. The original property has been divided up countless times, leaving no real remains from the 16th century. But there is a plaque.

And the square near the house is also named after the artist.

These days, Cannaregio is described as a more working-class neighborhood. 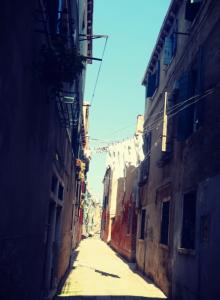 And what is left of the property does not give any impression of what was in Titian’s day a gigantic property, with gardens and a house so large it was at the time known as the casa grande. As Mark Hudson says in his fantastic book, Titian: The Last Days, by the standards of the time, Titian was a multimillionaire.

Despite the fact that he lived and worked his entire life in Venice, most of his greatest works are to be found elsewhere–especially in Madrid and London.

Indeed, in today’s Venice, there are only a handful of great Titian masterpieces to be seen.

Of these masterpieces, one is supremely moving.

It might not have made my list of “must sees” if the Assumptionhad been on display in the Frari. But, thanks to Mark Hudson’s book, I knew there was one other great masterpiece to be seen in Venice. 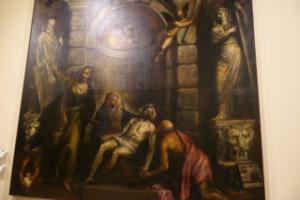 It was Titian’s last painting, the Pietà.

The artist had always intended to be buried in his hometown in the mountains, and he painted the picture for his tomb. However, before he died, he had several altercations with people back home. This led him to change his mind and go forward with a burial in the Frari– the place not just of his famed Assumption but of another of his great masterpieces, the Pesaro Altarpiece. He wanted to be buried near the Pieta, so he gave it as well to the Frari.

But Titian being Titian, he became unhappy with the place where they decided to hang the painting, so demanded it back! The argument with the friars of the Frari went all the way to the Papal Nuncio in Venice. Eventually, the friars reluctantly returned the painting to Titian. Scholars believe that he probably intended to go back to his first plan and be buried in his hometown, but before things could be worked out, he died during the plague of 1576. He was then buried in the Frari in Venice, where he remains today.

Nowadays, the picture is kept in Venice’s Gallerie dell’Accademia. It hangs in a very long, narrow hallway, where it is difficult to see properly. Not only is it hard to gain the distance necessary to view the picture in its entirety, but worse, there is a terrible glare from poor lightening.

But what a painting it is!

In the darkened place outside the tomb, Mary is cradling the lifeless body of her Son, the Christ; with Mary Magdalene in disturbed motion to the left, hands raised in dread.

Tragically, at the bottom right, under the architectural element shaped like a lion is a votive picture 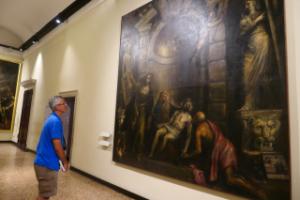 of Titian and his son on their knees praying to a picture of the Pietà –in all probability praying to be spared of the plague that eventually killed them both.

Despite the terrible glare of the lights and despite the painting’s challenging location, I was utterly floored. For in the gloomy darkness of death, there we find the great Titian, clothed in red like Saint Jerome; who–in the words of Mark Hudson– is humbled; fallen to his knees, he is crawling toward God. Reaching out to touch Jesus’ limp hand, you can almost taste the horror of what has happened, as the greatest artist in the world –this man who had everything– takes the hand of his Lord (pale against his own living flesh)–to beg for salvation.

All images are by the author

Catholic
The King of the Birds, or Easter is...
Vox Nova

Catholic
Miriam of Nazareth, Our Lady of Guadalupe
Vox Nova

Catholic
Fourth Sunday in Advent: Why Should the Lord...
Vox Nova
TRENDING AT PATHEOS Catholic