Holding Hands During the Our Father: A Bad Translation and some Thoughts

The old question of holding hands during the Our Father has erupted again.  Before moving to the heart of this post, a bit of personal history seems in order.  The first time I remember this coming up was in the mid-1980s, at the parish we belonged to in Portland, Oregon.  Some people were for it, some were against it, and I cannot remember if we did hold hands or not.  (My wife says we did.)  The whole parish did it when we lived in Oakland; it was more sporadic in our parishes in Indiana and Connecticut (mostly within family groups or close friends); and here in the South it is ubiquitous.  It has also been the custom in every black Catholic church I have visited, and my wife remembers it from the 1970s, visiting a small church in Oregon where her friend’s family belonged.    My wife and I have done it since Oakland, including our kids and such friends sitting by us who would join in.   So, to make my position clear, I see nothing wrong with the practice.

There are others, particularly more conservative minded Catholics, who object strongly to the practice as a liturgical abuse.  Periodically, the claim erupts that the practice is strictly forbidden by the rubrics or by “the Vatican”  and a couple of individual bishops (see, for instance, here) have criticized the practice and have attempted to ban it in their dioceses.  (I wonder how successful they have been:  the old saying, “Bishops propose, pastors dispose” comes to mind.)

The article is cut from some newspaper–probably a Diocesan paper.  The article is also carried by the news agency of the Archdiocese of Singapore, and I think originated there.  What caught my attention was the following quote:

I was not familiar with this, but the assertion that the Congregation for Divine Worship had declared this an “illicit practice”  seemed pretty damning.  I googled the passage and found this same quote in a half-dozen places, none of which were official.  The oldest, from 2006 was a PDF by a Ronald Smith; no further information about him was available.   Most sites were vague, just attributing it to the Congegation for Divine Worship or simply “the Vatican”.  However, the post above and Mr. Smith both gave what appeared to be an exact scholarly reference:

I decided to track this down.  A series of Google searches eventually led to the site (in Italian) of the Congregation for Divine Worship.  This led to the “Rivista Notitiae” which led to the first problem with this reference:  there is no “Volume XI”.   This set all sorts of alarm bells ringing:  in my experience tracking down anti-Catholic quotes, corrupt references usually led to spurious or forged quotes.  This is not conclusive, as people can and do make mistakes in their citations, even in print. (I have done it myself.)  So I kept looking.  The Notitiae are organized by year, and then by numbered volumes, which are paged consecutively during the year.  So in 1975, in volumes 108-109, at the bottom of p. 226, I found a short notice which I am going to include here in full, in the original Latin:

I don’t really speak Latin, but I have picked up a few words and a few grammatical points over the years.  And I speak three different romance languages (corrupt Latin, my son calls them).  Further, Google Translate does Latin to English.  So a half-hour of typing in various clauses convinced me that this passage could not be the source of the quote given above.

Yesterday, my son Kiko (who just graduated with a degree in Latin) and I went over the text and hacked out the following rough translation.  He concedes that it is rough and contains mistakes, but he swears that it conveys the gist of the meaning and that the above quote cannot be a translation of this passage.

Is it permissible that people at mass, instead of exchanging the sign of peace at the invitation of the deacon, instead hold hands during the Our Father.

R. Holding hands during this time is in itself able to be a sign of communion [community?] as much as the sign of peace.  Moreover this liturgical gesture has arisen spontaneously and by private [personal?] initiative, it is not given in the rubrics.  Nor does it mean that this is to be understood as a reason to suppress [supercede?] the sign of peace at the invitation “Let us offer [each other] a sign of peace”, which greatly signifies the grace and Christian character, that it be led by a gesture of lesser significance earlier in the mass.  In this regard, this substitution is simply disallowed [forbidden? disapproved?].

After writing this section, I did another search and found this curious passage on another traditionalist website (which seems to imply earlier that holding hands during the Our Father renders the mass invalid):

Holding hands during the Our Father has become commonplace, but it is an illicit addition to the Liturgy. Clarifications and Interpretations of the GIRM [“Notitiae” Vol. XI (1975) p. 226] explains:

112. QUERY 2: In some places there is a current practice whereby those taking part in the Mass replace the giving of the sign of peace at the deacon’s invitation by holding hands during the singing of the Lord’s Prayer. Is this acceptable?

REPLY: The prolonged holding of hands is of itself a sign of communion rather than of peace. Further, it is a liturgical gesture introduced spontaneously but on personal initiative; it is not in the rubrics. Nor is there any clear explanation of why the sign of peace at the invitation: “Let us offer each other the sign of peace” should be supplanted in order to bring a different gesture with less meaning into another part of the Mass: the sign of peace is filled with meaning, graciousness, and Christian inspiration. Any substitution for it must be repudiated.

Note that it gives the same quote and reference as from above, but it splits the quote into two pieces, treating the first half as their own text, and putting the second half in quotes.  They then go on, without any reference (except the unexplained “112: Query 2”) to give a translation of the Latin passage above that more or less conforms to the one my son and I came up with.

So, what can I conclude?  First, the original quotation above does not come from the passage in the Notitiae cited above, and I have not been able to find its origins.  If I had to guess, someone with a very limited knowledge of Latin, but a firm conviction of what the passage ought to say, made this mis-translation and it has been uncritically shared since then.  If anyone can provide any compelling evidence for its origin, I would be happy to update this post to include it.

Second, the original passage has nothing to do with whether holding hands during the Our Father is a licit practice.  It is instead ruling on the specific question as to whether this gesture can replace the sign of peace, and it declares that it cannot.  I have never seen or heard of this practice: have any of our readers encountered it?   I would be interested to know where in the 1970s this was being done, and how widespread it had become that the Congregation felt obliged to issue a ruling on it.   The only thing I have seen that is vaguely related has been  several conservative priests who on their own initiative suppressed the sign of peace and justified this practice by arguing that it “disrupted” the mass and “distracted” from Holy Communion.  (One such incident led to a very unhappy split in my old fraternity in CT which took a number of years to heal.)

Third, the USCCB has made it clear that the bishops collectively do not object to this practice (though as I noted, several individual bishops feel otherwise).  On their website they write:

Some people hold hands during the Lord’s Prayer, while others hold their hands out like the priest.  Is there a prescribed posture for the Our Father?

No position is prescribed in the Roman Missal for an assembly gesture during the Lord’s Prayer.

Not a ringing endorsement of the practice, but clearly not trying to suppress it, either.

As I made clear at the beginning, I favor the practice.  To me it seems fitting, given the communal nature of the prayer (which, unlike the Creed, starts with the first person plural–“Our Father”, not “My Father”–and stresses love of neighbor as well as love of God) to express this sign of community by holding hands.   I can see that other people feel differently, so I do not think we should force it upon people who do not want to do so.  There is room for lots of variation in practice within our church.

But what both perplexes and annoys me, both as an academic and as a Catholic, is the shoddy scholarship that tries to “prove” that this practice is wrong by misquoting and misinterpreting official sources.   I have often been dismayed by the poor quality of what I have read by many Catholic apologists, but have generally (thought not always) held my tongue.   In this case, the original FB post caught my attention and I was dismayed by a lot of the responses, and the credence which was being given to this argument.

Beyond the question of the apparent mis-translation used as evidence, I do not understand why this issue keeps coming up.  It is a small thing, and it is not a liturgical abuse (in the sense of violating the rubrics or the promulgated norms of the Church).   Perhaps, to borrow an idea from Slavoj Zizek, for some people this issue has a libidinal attachment beyond rational norms:  those of us who hold hands have stolen their jouissance, and all will be right with the world if only we could be made to stop.(*)

But tomorrow at mass I am going to be holding hands with my wife and son at, and with whoever is standing next to me, if he or she wants to.  If they do, great; if not, no worries.  The prayer is way more important than the sign, or worrying about who is or is not holding hands.

(*) To be clear:  I am over-stating the case here for a rhetorical flourish.  But Zizek has argued, persuasively, that any ideological system is supported not just by the rational assent of the people who hold it, but also by the psychological enjoyment, the jouissance, that it provides them.  When an ideological system fails to fully explain the state of the world, the natural response is to not criticize or question the ideology, but to find someone to blame for this gap:  someone has stolen your jouissance, and needs to be countered or eliminated in order to restore the harmony between your ideology and the world as it is.  Perhaps I could have just borrowed an expression from my children:  for some people, this question really rustles their jimmies. 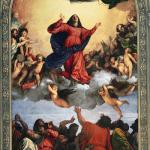