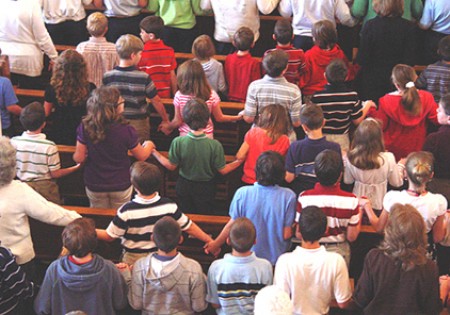 Hot on the heels of the new Roman Missal translation, the Bishop of Covington, Roger J. Foys, has issued a decree clarifying the proper gestures and postures for Mass, according to rubrics laid out in the General Instruction of the Roman Missal.

The rituals of the Roman Church, of which we are a part, call for specific words to be used as well as particular actions and gestures, both on the part of the priest and the faithful who join their hearts with his in their worship of God. We are encouraged as the Mystical Body of Christ to continual, ongoing conversion in the faith and to strengthen that which is good and holy in our individual lives as well as our common life as Catholics and to root out that which is evil.

Among the points his decree makes:

Special note should also be made concerning the gesture for the Our Father. Only the priest is given the instruction to “extend” his hands. Neither the deacon nor the lay faithful are instructed to do this. No gesture is prescribed for the lay faithful in the Roman Missal; nor the General Instruction of the Roman Missal, therefore the extending or holding of hands by the faithful should not be performed.

The text of the Roman Missal be used exactly as it is written. As stated in the citation from the Second Vatican Council none of us has the authority to change the text for any reason.

a. This includes altering or changing any of the language contained in the liturgical books of the Church, not only the Roman Missal, but the Lectionary and other ritual books – the responses and prayers of the priest, and also those of the people.

b. Please note that only those texts approved for use in the Dioceses of the United States may be used.

c. Priests and deacons are restricted in their use of the Penitential Act – Form C, to those invocations found in the Order of Mass of the Roman Missal and those in Appendix VI.

We’re now running in circles.  I’m out of breath.  And the law of diminishing returns is setting in.  Comments closed.

There Are No Invisible People to God
(Charity) Shutterstock Poor Uneducated Addicted Illegal Mentally ill Handicapped Unborn Homeless Convicted...
view all Catholic blogs
What Are Your Thoughts?leave a comment