Where is God when evil happens? 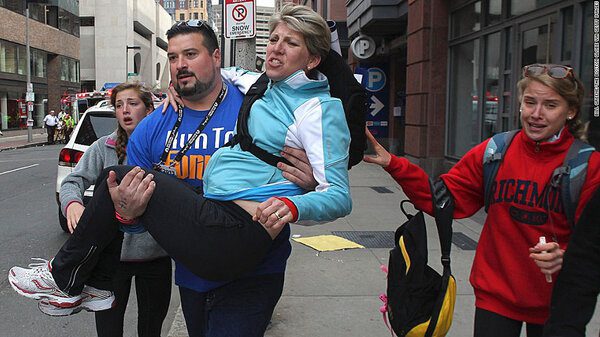 I started writing this post just after the Newtown school shootings in Connecticut this past January, and now feel compelled to finish it given the events that just took place at the 2013 Boston Marathon. When something so sinister happens to so many innocent people it begs the question:

How could God let this happen?

It’s something that may have passed your mind as the news came out of Boston, or perhaps when you first heard the spirit-draining news of the Connecticut school shootings. After all, if God is all knowing and all loving, how could God allow innocent people to be killed and maimed?

After both the events of Connecticut and Boston, I took a trip around the Web to hear what others were saying. Here are the responses that resonated with me the most, perhaps because they speculate on the answer—which makes sense, since there is no easy answer to be found. I’ve also included my own take at the end of this post as I try to find meaning in these terrible acts.

From Jim Denison in the Christian Post after the Connecticut shootings:

We’d all like a world where God prevents every Holocaust or 9/11 or Newtown tragedy. But once he intervenes to prevent the results of free will, where does he draw the line?

From Diana Butler Bass in the Huffington Post, also after the Connecticut shootings:

Somewhere, deep in our souls, we know we cannot know. The hidden God, I think, is the only God that makes any sense of Newtown: One neither and both present and absent; One in the hands of rescuers but not the hands that wielded the guns; One in the midst of murdered but not the act of murder. This is the God who is in all places and nowhere.

From Brett Williams, a pastor, in a local Austin newspaper after Newtown:

Before asking “Where was God in all of this?” and “Why would he allow such a thing to happen?” ask yourself the equally difficult question, “Why did God allow Jesus to die?”

I was buoyed today by the words of the poet and blogger Mark Lloyd Richardson who wrote a meaningful post “Look for the helpers”. Its title is based on an old quote from Mr. Rogers who once said “When I was a boy and I would see scary things in the news, my mother would say to me, ‘Look for the helpers. You will always find people who are helping.”

Sure enough we saw “the helpers” yesterday in the video footage from Boston, scores of people running into the mayhem, not away from it, to see how they could help the injured. Richardson included his own insightful thoughts on the bombing and how the good would win out:

The vast majority stands against that darkness and, like white blood cells attacking a virus, they dilute and weaken and eventually wash away the evil doers and, more importantly, the damage they wreak. This is beyond religion or creed or nation…so when you spot violence, or bigotry, or intolerance or fear or just garden-variety misogyny, hatred or ignorance, just look it in the eye and think, ‘The good outnumber you, and we always will.”

I had a similar take when I wrote a column for my small town newspaper a few weeks after 9/ll, trying to make sense of that tragedy. I just re-read it and it mirrors my sentiments today.

I believe there is a balance of good and evil in the world and we are blessed to live in a society that for the most part is good. When the scale abruptly tilts and evil slithers into our lives it catches us off guard. When it is of such a monstrous scale that it impacts and destroys innocent lives…it knocks us senseless. Yet, we have been graced with the inner strength and will to dissipate this evil. We do this by simply doing good, by helping the injured of both body and spirit to recover, by fighting this gross inhumanity with compassion and care for those around us.

So perhaps the answer is that in Boston on April 15th, as in so many horrid events, God was there. Only on days like this God appears to us in human form, in the people who come rushing in to comfort, rescue  and heal those who need help the most.

March 24, 2013
Leaving the church and finding God.
Next Post

April 25, 2013 Excessive generosity: how you can make your world a better place.
Recent Comments
0 | Leave a Comment
Browse Our Archives
Follow Us!

New Visions
Is the God of Love also the God...
Wake Up Call

New Visions
Are we worshipping Jesus when we should be...
Wake Up Call
TRENDING AT PATHEOS New Visions