Many have written about their profound experiences attending the 2015 Parliament of the World’s Religions. For me, it was a dream of many years come true. But in this column I want to pass on notes and ideas which I recorded that week. So please excuse the abbreviated and prosaic format; today I simply want to share.

“Kill Them (Qu’Ran), Do Not Spare Them (Torah), and Cast Them Into Everlasting Fire (New Testament): Context of Difficult Religious Texts

The one big speaker I wanted to hear at the Parliament was Karen Armstrong, who did not disappoint. She was joined on the panel by Jonathan Brown, a Georgetown University Islamic scholar, and Rabbi Lynn Gottlieb. Please note that I understand this is a sensitive topic. Please don’t kill the messenger if comments shared below upset you.

Brown says that, historically, expansive jihad is a community obligation, but defensive jihad is an individual obligation. The position of the Quran on warfare is not the same as classical jihad. The Quran says permission to fight is given to those who have been wronged. Only a few centuries after the Prophet, imams agreed that expansive jihad was no longer appropriate. Today’s Muslim scholars take the position that defense is okay, offense is not. Regarding what are often called the “sword verses” (9:1-29), abrogation (or annulment or repeat) is the approach of scholars, who also note that the rules in the Qu’ran began with a local context. He says that we can ignore the “texts of terror” or we can struggle with their meaning. Every generation is equidistant from god and must each engage in their own way.

Gottlieb says rabbis to to the Israeli Defense Force are advising soldiers, kill anything that moves. But rabbis over time moved away from the violence of the Torah. Jews are not yet healed from the Holocaust. “Choose life that you and your children might live.” It is forbidden for us to execute, from a rabbinic tradition. The real causes of violence are militarism, racism, etc. We must address these first.  American has guilt for the results of our colonialism so now we go to war again and again with no result.  We cannot protect ourselves without learning the tactics of nonviolent resistance.

Armstrong says if we don’t learn how to be a community the world will cease to be a viable place to live. People today are reading scripture with a literalness unprecedented in history. Don’t make religion the scapegoat for the secular sins of the 20th century. Scripture is not a text, it’s an activity. Until the Protestant Reformation no one read scriptures literally. Our scriptures are violent because we are violent. Compassion should make us look out at the world and feel profoundly uncomfortable.  All of our states are founded by and maintained by violence. This reinforces a sense of meaninglessness and futility. She calls on us to do the exegetical work with scriptures that will give us a peaceful, viable and sustainable world.

Compassion and Law Enforcement: Click to read my separate column on this panel discussion. 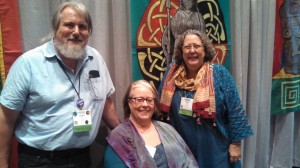 There are a number of interfaith groups which are part of this network, which includes United Religions Initiative founder and president Bishop William Swing. Members of each shared some of the things they have done over the years, including:

Unity in Diversity World Council candlelighting – a representative of each faith gives a very short reading from her/his tradition and lights a small candle, placing it around a larger unity candle.

Interfaith Walk Bead Exchange – Participants are given a small bag of beads, all one color. Each color represents a faith. During an activity, such as moving from one conversation to another, participants exchange a bead with each person. At the end, everyone creates a necklace or bracelet with the beads now in their bag, which should be many colors.

Souljourns – think of it as a gallery walk or pub crawl, except it’s to various places of worship.

Rabbi Rachel Mikva at Closing Plenary: You are the seeds of goodness. Plant yourselves and you will all be able to harvest the fruits of goodness. Here is a link to her talk.

Shaykh Omar Suleiman at Closing Plenary: The most dangerous person in the world is the one who has nothing to lose The same link will take you to his talk, too.

A great many of the Parliament programs were recorded and may be watched here.

Heard on the plane to Salt Lake City, which was filled with Parliament-goers:

This [interfaith] is what I will do for the rest of my life.
Organizational change: what is it we want to continue to do if we change?
A technique to use in a group which wants to learn how better to engage in dialog. When someone speaks they must start by reflecting a bit of what the previous person said.
About a failed meeting: “We’ve got to stop meeting like this.”  What have others done to recover when at an impasse or meltdown? Start out learning how dialog works.
A good meetup discussion topic – “What are you afraid of?”
People need the chance to tell their stories before they can turn to a collaborative process. 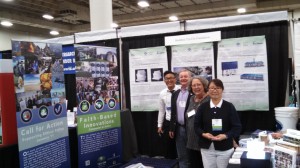 Heard around the Parliament:

The past has a vote, not a veto. The importance of ritual for making meaning. Rituals are doors. Make ritual about what’s really true.
Not women knocking on doors but women opening new doors. Our moral and ethical codes are a means to an end, not the end itself.
We can never forget the tie that people have to the religion in which they were brought up.
There must be a willingness to risk and to experience discomfort.
The internet is making new forms of hate speech. Facebook e.g. may only take action when online spills over into real world harassment. What to do? Let companies know their profits will suffer. There are benefits to acting as a group. Get behind a hashtag. The difference between BLM (Black Lives Matter) and ALM (All Lives Matter) is inclusivity vs. generalization. All agree that all lives matter, but to say black lives matter is a call to action.
Everyone has within them what is needed to promote peace.

And heard in my own mind:

What will IPSC be able to say we did to make things better post-Mother Emanuel?
What about an ad campaign of slogans that promote interfaith ideas? Perhaps even place paid ads in state media?
How to make people feel engaged rather than that they are being attacked or drawn into controversy? We create safe boundaries by establishing respectful dialogue.

November 14, 2015 Blood Feud
Recent Comments
0 | Leave a Comment
"I do not know how I have not seen this article before. Wonderful to read ..."
Donna Donovan Interfaith in Prison
"David - I am not totally sure if you are the same David who said ..."
T B Interfaith as a Pagan: Assumptions
"Wow - powerful story, Sage. Thank you."
Holli Emore Blood Feud
"On the subject of cutting things out of one's life without understanding how they are ..."
Sage Blackthorn Blood Feud
Browse Our Archives
Related posts from Wild Garden