From An Equinox Guest

Editor’s Note: The following is a personal reflection shared with me by an interfaith friend who joined Temple Osireion on the autumn equinox for the public ceremony which we held under the century-old oaks of the S.C. State House grounds. My anonymous friend’s comments are deeply poignant given the apocalypse of fear, shame and soul-searching we in South Carolina have experienced in the three months since a stranger stood up in a Bible study at Mother Emanuel AME and murdered nine people. It also underscores the lifesaving importance of getting to know others in our communities through interfaith activities.

Last week, I joined a small group of my Pagan friends to celebrate a sacred presentation to Ma’at at the autumn equinox. “May Ma’at be in my heart,” I still feel her presence now. I should say, the Return to Balance ceremony deserves much more than a mention and a quote.

However, I am reflecting on how that event took me on a brief, unscheduled, inner journey that started in the moment, traveled to years past and bit in the future, then returned to living firmly, truly, fully in the moment. We reflect on life and death for various reasons and in different frequencies, and my little journey was not just about death, but specifically about anticipating one’s own death; of that, I have a clear view. That view evolved over the years and was by no means born at any certain point, however, one past event stood out like a benchmark.

Two decades ago, I volunteered to accompany a small group of children with mental and/or physical disabilities on a playful hot summer afternoon at a generous donor’s farm. The children especially enjoyed playing in a small, partly filled, water reservoir as if it were a resort-quality swimming pool. While splashing around, “Johnny,” an eight-year-old, managed to trip, fell face down, and floated in the two-feet deep “pool,” but could neither turn around nor stand up, he could only flap his arms violently while his face was fully submerged. For two very long seconds, I watched in horror how he was not physically able or strong enough to save his own life.

Clothes and shoes on, I jumped in, slipped, fell on my behind, stood up, rushed toward “Johnny” and carried him to safety. The other two volunteers kept watchful eyes on the rest while I made sure he was well. For several days after, two strong feelings overwhelmed me, a sense of awe at saving a human life (my first), and an excruciating pain in my tailbone and lower back. I truly felt that my fall on that concrete slab must have caused a permanent injury, or a fast approaching death. Well, it did not, but it left me a lasting impression.

There cannot be a more noble way to die than while saving someone’s life.

I saw it twenty years ago, although not as clearly, and I do today with unmistakable conviction. Plug in my Catholic upbringing and the picture gets more vivid, didn’t Jesus teach putting one’s self in the service of those in need? Didn’t he die for his loved ones? Well, dying while saving others sounds close enough.

That brings me to Tuesday and that glorious autumnal celebration of restoring balance and order. I had been looking forward to that gathering, and was thoroughly delighted to meet my Pagan friends in such a happy, solemn, beautiful setting. City noise had retired for the day, old trees graced us with tender shade, cool breeze caressed our faces, and when the sun did finally set, it left behind magnificent, muted natural colors. It was the kind of  scenery one can only see in a feel-good movie. So the ceremony began. We gathered in a circle, made offerings, and broke bread.

Yet, there were a few problems, a) we gathered in a public place, b) conducting a Pagan ceremony, c) in South Carolina!

Though passersby paid little or no attention to our small group, I was keenly aware of that slim possibility of some good ole Christian(s) attempting a violent act against this “gang of heathens shamelessly desecrating OUR Christian land,” for it is written somewhere in the Bible — or the Constitution, somewhere, maybe, probably, definitely — that it is our God-given right, and duty, to bear the most lethal arms and use them against evil enemies to defend our righteous convictions. Enemies could be anyone, or everyone, who would not happen to share OUR beliefs.

Literally and figuratively, I kept my eyes open throughout the ceremony and thought, “This is how it could end.” I stayed, and enjoyed what could have been my last hour in intense presence and total peace. Forget about “life flashing before your eyes” and “making peace with your loved ones;” why would anyone in their right mind wait until their last hour to suddenly remember doing that? What a cliché! Instead, I was praying that balance and truth and justice rule this land, surrounded by kind faces in a circle, during a sacred ceremony; who could ask for more? 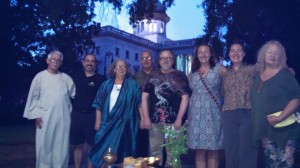 There were nine of us and if we were attacked I realistically expected not being able to save all of them, unless our assailant were stupid enough to give up the advantage of surprise. Still, I made up my mind. At the first sign of an impending mass shooting, I would run toward the shooter, as fast as I could, waving my arms randomly while shouting at him things like, “God Bless America,” or, “I love you, my brother,” or, “Jesus is Lord.” This would be meant to confuse and distract the assailant. If that strategy gave me a few precious seconds, I might be able to get to the assailant and engage them, or at least, my body would fall on their lap giving my Pagan friends a chance to react. Throughout the ceremony I stayed alert and was ready; it felt like both a drill and a meditation.

Fortunately, none of this happened, and we were later joined by more friends, Pagan and otherwise.  I drove away on a spiritual high, I-277 had never looked so bright after dark. I contemplated how I was still alive, going home to kiss my beloved wife and share a lovely homemade dinner, would get up next morning and resume my daily joys and responsibilities. Nobody would need to mourn my death nor deal with whatever aftermath my absence would have left.

I silently embraced that sweet, warm sense of calm and profound peace. I had joyously accepted the possibility of dying while protecting my Pagan friends from self-righteous religious bigotry. Jesus would be proud.