There are prophets of peace and builders of peace. There are protesters and institutional reformers. There are outsiders and insiders. The distinction is fluid. A person might be a prophetic outsider on one topic and an expert insider on another.
Newspapers and textbooks often present the outsider as a model for social justice. The outsider is concerned with social change but not overly concerned with how to implement reform. The insider gets less attention. They are the ones who speak institutional jargon. They can be dull. They know tax tables and zoning laws; they know about international protocols and about pipeline treaties. These insiders resist the first answer that occurs to them because they have heard the world’s complexities reduced to slogans. They take confidence in their faith but they do not believe that God is on their side or that God is opposed to their opponents. Insiders regularly wonder if they are right. They readily acknowledge to themselves that in this or that situation they are only 75% right.

The outsider is necessary for momentum but eventually the insider makes social change. Without inside reformers there are only passing reactions to grievances. Are there any bridges between the vociferous outsider and the stodgy insider?
The term ginger group is sometimes used in England and elsewhere. It refers to a conscience within a broader social reform movement or organization. A ginger group is loyal but it also dissents from an organization’s leaders. For example, Labor Notes (www.labornotes.org) with offices in Detroit and Brooklyn is loyal to unions. But it champions those workers that reform a workplace without waiting for clearance from an international union headquarters. Voice of the Faithful (www.votf.org), to mention a second example, has headquarters in suburban Boston. Its members have not left Roman Catholicism in disgust over bishops’ malfeasance nor have they challenged Catholic dogma. Instead they are a controversial ginger group that presses for reform.
Center for Action and Contemplation (www.cac.org) is the hub for all things regarding Fr. Richard Rohr, OFM. In a 2013 pamphlet titled Eight Core Principles and in some of his blogs, Rohr uses the term edge of the inside. A group on the edge of the inside of an institution is “free from its central seductions, but also free to hear its core message in very new and creative ways,” Rohr writes. An edge of the inside type group must love both the institution and the outsider critique of the institution, and it must “know how to move between these two loves.” An edge of the inside group advocates for change by “quoting [the institution’s] own documents, constitutions, heroes, and Scriptures against its present practice. This is their secret: systems are best unlocked from inside,” Rohr writes. The total outsider simplistically chooses one idealized alternative while denigrating the other institution. “This has gotten us nowhere,” Rohr concludes. 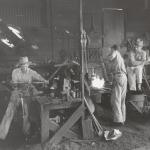 July 10, 2019 Extreme Capitalism
Recent Comments
0 | Leave a Comment
"Bill-I observe that subsidiarity/localism is actually a big issue. Some of the alienation that is ..."
Chicagoan Localism
"l think that this commentary by Bill Droel offers a perspective that can help the ..."
Chicagoan Turning To Politics
"Droel commits the sin of lying to the innocent and unable to defend themselves. He ..."
I Love Libertarians Strikes
"I propose that the best way to help working class people in the US is ..."
bill wald Extreme Capitalism
Browse Our Archives
Related posts from The Working Catholic

Faith and Work
Too Much Talk
The Working Catholic