Freedom of religion court cases are a good way to teach students about Native American spirituality.

For example, the 2012 decision by the U.S. Fish and Wildlife Service to allow the Northern Arapaho Tribe to kill two bald eagles for religious use allowed me to discuss the importance of tribal rituals and how they are colliding with conservationists today.

Students read this NPR story about the decision, summarized the issues on paper, and then debated the two sides. Many conservationists opposed the permit because bald eagles are an endangered species. After discussing the issues, I showed the students the fifteen minute Ted Talk  below by Aaron Huey about Native Americans. Huey is a photo journalist who has contributed to National Geographic.

Huey offers a sobering timeline of broken treaties and statistics that show a people living like they are in a third world country. For example, seventy percent of young Native Americans drop out of high school and men have a life span of only forty-eight years.

Here are some more resources the 2012 bald eagle case. 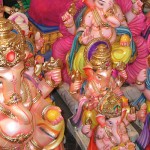 Jesus and the 2 Heavens: Which Do You...
Do you believe in a place called heaven? If you were raised...
view all Interfaith blogs
What Are Your Thoughts?leave a comment
Copyright 2008-2021, Patheos. All rights reserved.