“How can Anti-Zionism be the new antisemitism?” asks Rabbi Jonathan Sacks in his latest six minute whiteboard animation.

You can view here.

And here’s the full transcript.

To remind you, Sacks is the ultimate Jewish establishment figure. He was Chief Rabbi of Great Britain and the Commonwealth from 1991-2013; he was made a member of the British House of Lords in 2009; he’s the author of more than 25 books on Judaism such as To Heal a Fractured World, The Dignity of Difference, and Not in God’s Name. He’s also written a multi volume Torah commentary and edited prayer books. Sacks is highly respected within the Jewish world and well beyond it. When he talks, people of all faiths, and none, stop and listen.

I’ve read much of his work over the years but over time I’ve become increasingly disenchanted. In the abstract, Sacks is a great moral educator who can draw on Jewish scripture to make universal observations about justice, kindness, compassion, tolerance and political leadership. But when it comes to the greatest moral issue facing Jews and Judaism today, Israel and the Palestinians, he offers nothing but dumbed-down history and a version of Judaism that sells it short and denies another people their heritage and story.

All of this is on show in the Rabbi’s latest video. It’s one of several he’s made and they’re all designed to reach a broader audience than his books. I dealt with his animated distortions and untruths about BDS in an earlier post.

This new video is more significant. It’s an attempt to make any critical debate about Zionism impossible.

Sacks’ international standing means even his cartoon capers will be taken seriously no matter how dumbed-down and prejudiced is his presentation of Judaism and Jewish history.

The starting point is the assertion that anti-Zionism can be nothing other than antisemitism. Counter to the tradition that two Jews will always produce three opinions, Sacks makes clear that this particular subject is not open to the usual rabbinical rigour applied to the interpretation of matters of Jewish law or indeed any other subject of Jewish interest. When it comes to Zionism, only one interpretation is kosher.

Remember, Sacks doesn’t make these videos for a Jewish religious audience. He makes them for the secular world of politics in which he knows that Zionism is becoming a highly contested ideology because of its consequences for the Palestinian people.

Here’s an extract from the video which anyone who follows Sacks’ writing in recent years and his theory of “mutating antisemitism” will be familiar with:

It’s a tidy summation, easy on the ear and the brain. It uses the truth of antisemitism down through the centuries to set up a lie about Zionism.

The underlying assumption is that the creation of the Jewish State of Israel was an innocent, noble endeavour and certainly without victims. Therefore, the only possible explanation of the new “hate” is that it’s driven by age-old antisemitism.

Aside from being unbelievably simplistic and devoid of context, Sacks  pretends to be talking history and religion while in fact he’s being deeply political. If you’re a Palestinian watching this video, then according to Sacks’ rhetorical construction of events, despite your home being destroyed, your farmland confiscated and your family sent into exile, the only possible reason for your objection to Zionism must be antisemitism.

Sacks needs to be told that he cannot make statements about Zionism without first thinking how they would sound to Palestinian ears. The ideology that Sacks defends has impacted the lives of every Palestinian alive today. Zionism is part of their history too.

Sacks sketches out his dumb-downed Jewish history emphasising the 3,000 year unbroken connection between Jews and the Biblical Land of Israel. I have no wish to deny this connection. But this telling of our story wipes out millennia long connections to places elsewhere in the word, places which have shaped Judaism, as we recognise it today, just as much as Ancient Israel.

Our Jewish ‘exile’ has not been an historical aberration. Our wanderings have not been an unfortunate detour from our true destination. We are the product of a scattered existence of which there is nothing to be ashamed of and much to celebrate.

The construction of the Talmud, the wisdom of Midrash, the philosophy of Maimonides, the Hasidic masters, the Jewish Enlightenment, the paintings of Chagall, the philosophy of Hannah Arendt, the plays of Arthur Miller, the music of Paul Simon and Bob Dylan – these are the products of Jewish experience too and they happened well beyond the Land of Israel. Frankly, this inheritance is more recognisable to me as ‘Jewish’ than the modern State of Israel, built as it is on an unhappy cocktail of secular nationalist identity and extreme religious orthodoxy that could only be achieved through the displacement of another people.

If Zionist thinking has always been such a central tenet of Jewish life, why was it such a contentious idea among Jews for the first 50 years of its existence? But this has been erased from the whiteboard of Jewish history. Apparently, we’ve all been Zionists for 3,000 years.

But it’s not just my history that Sacks ignores.

Jews are the only people who ever created a nation state there. At all other times in the past 3,000 years it was merely an administrative district in an empire whose centre was elsewhere: the Assyrian, Babylonian, Persian, Alexandrian, Roman and Byzantine empires, the Crusaders of the Holy Roman Empire, the various Muslim empires such as the Umayyads, Abbasids, Fatimids, Mamluks and Ottomans, and finally the British.

Never mind the “empires whose centres were elsewhere”, why is it of no relevance who was actually living on the land, apart from the minority Jewish population? Why does Sacks make these people invisible in his narrative?

Sacks talks of Jews as:

the only people who have maintained a continuous presence in the land. They are its indigenous, original inhabitants.

So how long does anybody else have to be around before they stop being squatters, interlopers and off-comers? Five hundred years? A thousand? Two thousand? When can anyone else claim a “continuous presence”? The chances are that today’s Palestinians carry the same amount of first century Jewish DNA as I do. Perhaps more.

Then comes another shameless piece of historical revisionism.

The November 1947 United Nations vote to bring Israel into existence was a momentous reversal of imperialism. It gave back to the Jewish people the home taken from them by empire after empire.

The problem for Sacks is that his attempt at historical inversion ignores Zionism’s founding fathers. The early Zionist leaders knew their project was a colonial enterprise and knew they needed the support of imperial powers to achieve their aims. Herzl and Weizmann both imagined the Jewish State as a Western Imperial outpost – good for Jews, good for the ‘inferior natives’ they would displace, and good for their imperial sponsors. The idea that it was a “reversal of imperialism” is absurd, especially from a public intellectual like Sacks.

Sacks seems remarkably relaxed about cancelling out the contribution of his own rabbinic ancestors. He reminds us that many of the 613 commandments identified in the Torah relate only to living in the Promised Land. He fails to mention that the majority of those commandments refer to Temple practice including animal sacrifice.

The genius of rabbinic Judaism was not only to make Jewish observance ‘portable’ but also to move it forward in its theological understanding. For most of our history, possession of the Land has not be necessary for the maintenance and development of Judaism. Leaving the land made Judaism better not worse.

It’s when Sacks brings his just and compassionate telling of Jewish theology into the whiteboard frame that I’m most struck by scale of the cognitive dissonance that must be at work in the Rabbi’s head.

Read the Hebrew Bible and you’ll see immediately that it isn’t about the salvation of the soul. It’s about creating in the holy land a society based on the biblical ideas of justice, welfare, the sanctity of life – and caring for the stranger “because you know what it feels like to be a stranger.”

This is my idea of Judaism too. Except, the story of the Jewish people has been the story of applying these values to every country in which we found ourselves. Judaism became our home and we carried it with us.

If Sacks believes what he’s saying about the grand project of Jewish life in the Holy Land, then where is his criticism of the modern State of Israel?

At best, I would expect Sacks to see the Palestinians as the “stranger” of Jewish theology. To call a Palestinian a stranger in their own land is deeply insulting as well as being historical nonsense, but let’s put that to one side for the moment. How is stealing land and water; destroying homes; imprisonment without charge; snipers at the Gaza fence, “caring for the stranger”? Why does Sacks have no Torah commentary on any of this?

I have no problem with using Jewish myths to explain and illustrate our  religious understanding and to shape our ethical outlook. But that’s not how Sacks uses religious mythology. Sacks is applying Jewish myth, scripture, and ancient history to a highly political Jewish agenda that’s become enthralled to secular ideas of power. Calling anti-Zionism antisemitism is not a lesson in Jewish history, it’s an exercise in the delegitimisation of another people’s historic experience. In using his global reputation as a moral leader to defend Zionism, Sacks ends up not defending Judaism but undermining it.

We don’t need dumbed-down Jewish Studies or a whiteboard whitewash of Zionism to resolve the  greatest moral challenge facing Jews and Judaism. Zionism cannot be a ‘no-go area’ for debate in either religious or academic discussion. The sooner that admirers of Jonathan Sacks (both Jewish and non-Jewish) grasp this, the sooner we can progress to a version of Judaism that takes seriously the meaning of justice, welfare and the sanctity of life. 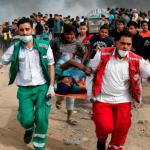 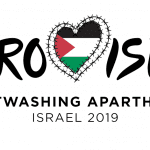 May 14, 2019 #DareToDreamOfFreedom and don’t watch Eurovision
Recent Comments
0 | Leave a Comment
Browse Our Archives
get the latest updates from
Writing from the Edge
and the Patheos
Best of Patheos
Channel
POPULAR AT PATHEOS Jewish
1