Chip in for Cranston

The faithful of Cranston. 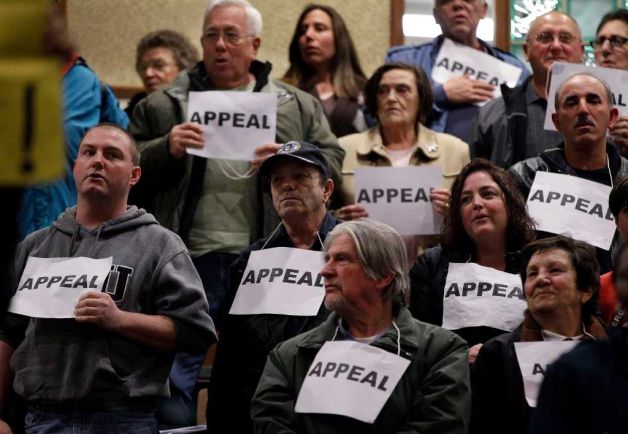 I do not doubt for a single minute the Christians of Cranston felt deep conviction that the school banner needed to stay up.  They showed up at meetings, they have some pretty sweet signs hanging there, and took time out of their schedule to send violent death threats to a high school student, all while basking in the warm glowing embrace of their Lord.

That’s the power of a believer. These people know the One True God(TM) is on their side.

Over a century of legal precedent, judicial rulings, and established law was on our side, but that’s not the point.

These people know in their heart that if they could just appeal the ruling, they could keep their banner. They know that no cost is too great to ensure that prayer stays hanging on the wall. After all, Romans 8:31 “If God is for us, who can be against us?”

Except here we are, a week later, the school district decided not to spend the money on an appeal…..and that’s it.

No fundraising. No bake sales. No plate being passed. You can donate to a scholarship fund for Jessica, but there’s nowhere for the minions of God to donate money for an appeal. For all the sign waving, “Under God” yelling, religious posturing, and faith their god is on their side, there’s not one of them willing to spend their own money to make sure their religion gets special privilege. Not so much as a Chip In webpage.

Honestly, I’m all in favor of the devout citizens of Cranston paying for the appeal. As long as every penny comes from the private & pious, I say have at it. They got off easy the first time only owing $173,000. The lesson in constitutional law from the RI ACLU might not be so generous the second time.

I hear religion makes you a better person, I just wonder why they always want to use my tax dollars to tell me about it.

Hobby Lobby Staying Open After Vision...
Dispatches From the Culture Wars
Related posts from What Would JT Do?