These people are an embarrassment to this movement and to humanity.

These people are an embarrassment to this movement and to humanity. September 5, 2012 JT Eberhard 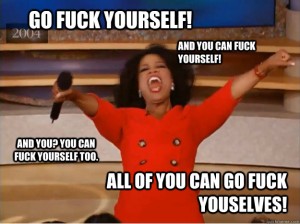 So Jen McCreight has decided to leave blogging for a bit.  I’m glad.  I’m glad because I care for my friend and I realize that, as great as she is, that she’s worth nothing to us if she’s only writing because it’s easier than the guilt of not writing.  We all care about this movement, sometimes so much that we’ll sacrifice our own well-being to serve it.  This is what Jen is doing with her depression.  It’s time for her to step away.  We will all be waiting for her upon her return.

Her depression is being exacerbated by a cabal of cruel people so full of hate for another human being that they’ll celebrate someone else’s misery just to be shed of their voice on ideas they don’t like.  Those people are evil.

Jen is one of my best friends in this movement.  We don’t always agree, and that’s ok.  Other bloggers have cataloged the shit that Jen has had to put up with, so I won’t rehash that here.  What I will do is lend one more voice stating the obvious: the people who have harassed her into quitting are inhuman shitbags.  As the atheism movement gets bigger, the tiny percentage of just rotten folks will continue to be comprised of more and more people who would sooner destroy a person than an idea.  Those people don’t deserve this community.

There can certainly be atheists who are terrible people.  After all, my position has always been that reason and compassion are what makes you a good person.  If you’re reasonable without compassion, you’re a monster.  If you’re compassionate without reason, ditto.  There are undoubtedly atheists who are neither reasonable or compassionate, and they are just as much of an embarrassment to humanity as the wicked believers.  They deserve just as much disdain from us.

Regardless of what you think about feminism or what you think about Atheism plus, if you’re a decent person you must agree that compassion is key to a better world, and the people harassing Jen are unconscionable.  They won’t care that someone else said so, but I at least wanted to add my voice to the crescendo condemning them.

Fuck each and every one of ’em.

Deconversion: Brett McCracken Gets It Completely...
Roll to Disbelieve
Related posts from What Would JT Do?