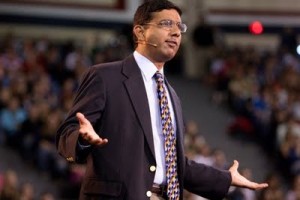 Dinesh D’souza is one of those “top tier” Christian apologists who is always getting thrown at me.  You know Dinesh, right?  He’s the one who argues that Christianity makes someone more moral.  That’s why in his book, What’s So Great About Christianity, he wrote…

“As fallible human beings we can be wrong about a lot of things but we cannot be wrong in how we feel about someone else. At the same time, Christianity emphasized that free choice should also be binding choice. As we have consented to marry without coercion, we should live up to our vows and preserve marriage as a lifelong commitment.”

“Christianity did not contest patriarchy, but it elevated the status of women within it. The Christian prohibition on adultery—a sin viewed as equally serious for men and women—placed a moral leash on the universal double standard that commanded women to behave themselves while men did as they pleased.”

“High rates of divorce in the West can be accounted for by the moral force generated by the secular ethic. Today the woman who leaves her husband says, ‘I felt called to leave. My life would have been a waste if I stayed. My marriage had become a kind of prison. I just had to follow my heart and go with Ted.’ So divorce has become, as it never was before, a form of personal liberation, what Barbara Dafoe Whitehead terms ‘expressive divorce.’ Here we have the first hint of a serious problem with secular morality. In its central domain, that of love, it is notoriously fickle.”

And you can just guess what he thinks about two guys or two gals who fall in love (hint: EVIL!).  Which is why I was shocked, shocked, to learn that he has been…oh, what’s the tactful way to put this?  Fucking around on his wife.

Finally, near 11 p.m., event organizer Tony Beam escorted D’Souza and Joseph to the nearby Comfort Suites. Beam noted that they checked in together and were apparently sharing a room for the night in the sold-out hotel. The next morning, around 6 a.m., Beam arrived back at the hotel and called up to D’Souza’s room. “We’ll be down in 10 minutes,” D’Souza told Beam. D’Souza and Joseph came down together, and Beam took them to the airport.

The next day another conference organizer, Alex McFarland, distressed by D’Souza’s behavior, confronted him in a telephone conversation. D’Souza admitted he shared a room with his fiancée but said “nothing happened.” When I called D’Souza, he confirmed that he was indeed engaged to Joseph, but did not explain how he could be engaged to one woman while still married to another. When asked when he had filed for divorce from his wife, Dixie, D’Souza answered, “Recently.”

According to San Diego County (Calif.) Superior Court records, D’Souza filed for divorce only on Oct. 4, the day I spoke with him. Under California law, that starts the clock on a six-month waiting period for divorce. D’Souza on Oct. 4 told me his marriage was “over,” said he “is sure Denise is the one for me,” and said he had “done nothing wrong.”

Now, ordinarily I couldn’t care less about people’s sex lives.  But I sure care when they’re hypocritical sleazoids who flit about the country telling people they need religion for morality.

(Thanks to Adam Lee for the link)

October 18, 2012 Los Links 10/18.
Recent Comments
0 | Leave a Comment
Browse Our Archives
get the latest from
Nonreligious
Sign up for our newsletter
POPULAR AT PATHEOS Nonreligious
1