It’s god’s word…until it’s convenient for them to change it.

It’s god’s word…until it’s convenient for them to change it. October 14, 2012 JT Eberhard 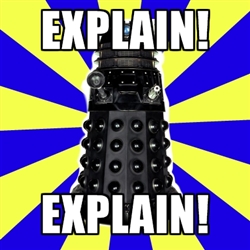 Mitt Romney’s campaign just got an endorsement from Billy Graham.  I’m sure that will change the minds of all of the Obama supporters in his congregation.

There’s just this little hangup.  Until a few month’s ago, Graham’s website said…

A cult is any group which teaches doctrines or beliefs that deviate from the biblical message of the Christian faith. It is very important that we recognize cults and avoid any involvement with them. Cults often teach some Christian truth mixed with error, which may be difficult to detect.

There are some features common to most cults:

• They do not adhere solely to the sixty-six books of the Bible as the inspired Word of God. They add their “special revelations” to the Bible and view them as equally authoritative.

• They do not accept that our relationship to Jesus Christ is a reality “by grace through faith” alone, but promote instead a salvation by works.

• They do not give Jesus Christ, the divine Son of God, full recognition as the second Person of the Trinity, composed of God the Father, God the Son, and God the Holy Spirit.

Some of these groups are Jehovah’s Witnesses, Mormons, the Unification Church, Unitarians, Spiritists, Scientologists, and others.

Billy Graham supports a cultist for President?  How will Jesus feel about that?

Today, the Sacramento Bee and other media outlets, including Graham’s own website, posted Graham’s statement endorsing Mitt Romney for president, and two commenters posted a link to the 2010 Graham statement classifying the Mormon religion as a cult. Hours later, that page no longer exists…

No worries!  Graham didn’t “change his mind,” his ministry is just a “growing revelation.”  Sadly, at least for Billy, the internet tends to remember things.  There was a time when religious leaders could scrub away facts and be done with the matter, but not so much nowadays.

You can’t run from the wayback machine:

A Google webcache of that page confirms its prior existence, and an Archive.org webcache first crawled that page on June 5, 2010. Here’s a screenshot of the Google web cache: 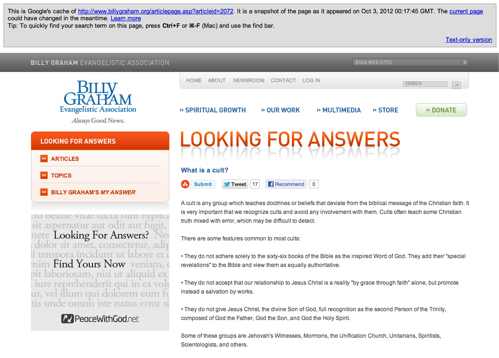 Perhaps it was some other people at Graham’s ministry calling Mormonism a cult.  However, one doesn’t have to go far to find two things:

1.  Christian groups tend to suck massively at web design.
2.  Lots of Christians share the belief that Mormonism is a cult.

For those protesting that Mormonism is not a cult, isn’t it strange how god is whispering two conclusions to two different groups?  The big G has a history of doing that.  I could admire him for stirring up shit if I didn’t so adamantly oppose war over religious differences (like the ones clogging up our history).

More likely, “revelation from god” is a euphemism for what best serves religious leaders, and can be erased and supplanted at the will of a mortal whenever god’s word has grown inconvenient.

Barna Group Sure Hopes Gen Z...
Roll to Disbelieve
Related posts from What Would JT Do?