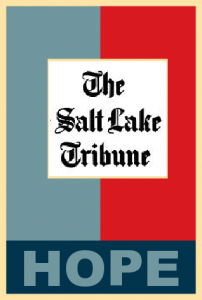 So the Romney/Ryan ticket has lost three of the four debates (and really, Obama did more to lose the first debate than Romney did to win it).  And yes, Mitt Romney has no chance of carrying the state where he was governor.  But Romney still has allies!  He can at least count on the endorsement of the Salt Lake Tribune in the Mormon-heavy, Conservative state of Utah.

In considering which candidate to endorse, The Salt Lake Tribune editorial board had hoped that Romney would exhibit the same talents for organization, pragmatic problem solving and inspired leadership that he displayed here more than a decade ago. Instead, we have watched him morph into a friend of the far right, then tack toward the center with breathtaking aplomb. Through a pair of presidential debates, Romney’s domestic agenda remains bereft of detail and worthy of mistrust.

Therefore, our endorsement must go to the incumbent, a competent leader who, against tough odds, has guided the country through catastrophe and set a course that, while rocky, is pointing toward a brighter day. The president has earned a second term. Romney, in whatever guise, does not deserve a first.