Wouldn’t it be nice if somebody had a website where you could input how much money you make in a year, and then it tell you an estimate of which current candidate would save you more money?

Because the tax code is complex, the calculator makes a number of simplifying assumptions that may differ from the circumstances of any particular user. It assumes all income is from wages. For married filers, it assumes that income is split evenly between two earners. It assumes that income does not vary over the years analyzed. It assumes that taxpayers claim the standard deduction for the purpose of analyzing the impact of the expiration of the middle class tax cuts. The impact of Mitt Romney’s tax plan is based on an analysis by the nonpartisan Tax Policy Center, which determines the tax increase or tax cut the average family in each income group would face if Romney paid for his $5 trillion tax plan by cutting tax benefits. The analysis assumes that Romney eliminates all tax benefits, except those for savings and investment, for households earning over $200,000, and reduces those benefits for households earning under $200,000 to cover the rest of the cost – resulting in a reduction by more than half. The Tax Policy Center uses income thresholds based on “cash income”, a measure broader than AGI commonly used by TPC. The calculator is intended for information purposes only.

It starts lowering your taxes under a Romney plan right about at an annual income of $497,500……….so, exactly the sort of crowd donating heavily to the GOP already.

Of course, even with that…. 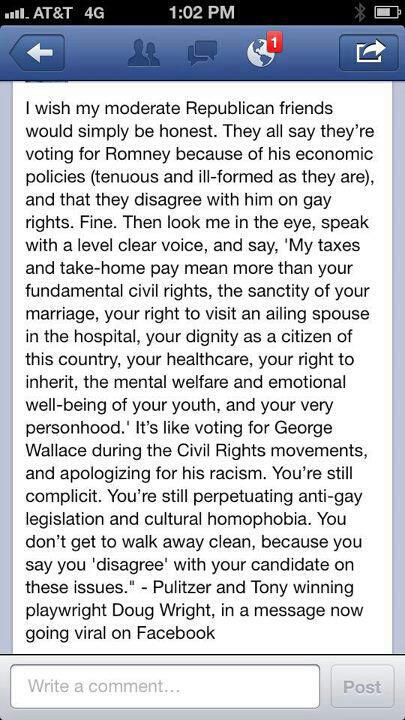 October 27, 2012 Reason in the Rock is rocking!
Recent Comments
0 | Leave a Comment
Browse Our Archives
Follow Us!