I’m JT, and you can tell which posts are mine because they’ll be in Green.

I’m Christina, and you can tell which posts are mine because they’ll be awesome.  Also the font will be blue.

1:59am – Obama: It doesn’t matter if you’re gay or straight, you can make it here in America! (and he mentioned god 3 times. kinda. (God’s grace and God bless you)

1:53am – Obama: What makes Americans exceptional are the bonds we hold (NOT GOD) – love, charity, duty and patriotism (NOT FAITH)

1:50am – Obama wants to work with leaders of both parties – like reducing the deficit and reforming immigration.

1:46am – Obama: “Arguments we have are a mark of our liberty.” Damn straight!

1:44am – Obama hasn’t mentioned god or prayers yet.

1:38am – Obama: The task of perfecting our union moves forward – because of you. You reaffirmed the spirit.. that has lifted this country from the depths of despair… We are an American family and we rise or fall together as one family and as one nation… while our road has been hard… we have picked ourselves up, we have fought our way back. We know that for the USA, the best is yet to come…

1:32am – Kitteh is no longer amused by ur politiks. 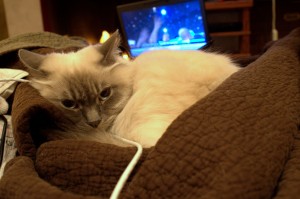 1:26am – Kitteh, and President arriving! 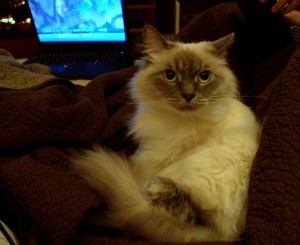 1:23am – Victory picture of kitteh coming…

Bill O’Reilly on Fox News currently giving Hurricane Sandy credit for an Obama victory while continuing to harp on the Libya Conspiracy.

Fox News Blonde #11 is asking “How did we get to this point?” in a tone of shock.

O’Reilly’s answer: Whites are getting outnumbered and minorities are lazy and want free stuff.

1:10am – Obama en route to give the victory speech.

1:05am – Oh hey, that WAS Mitts victory speech! he just changed a few words. I could tell.

12:56am – Mittens – The nation is at a critical point – our leaders have to reach across the aisle. Job creators – invest! I believe in America! I ran for office because I’m concerned for America. We will pray for this nation! Praypraypraypraygodbless.

12:55am – Mittens congratulates The Barakuda. He prays that the president will be successful in guiding our nation. He says thank you, but his face says, “Fuck you”.

12:43am – Romney has called the president and conceded!

12:42am Maybe Mitt is waiting for his divine providence.

12:27am – Tammy Duckworth was elected to Congress. She is a double amputee and a veteran. Obama is up in the popular vote.

12:13am – CBS is projecting Ohio for president because the president has done well in swing areas.

12:00am – Fox ran out of things to talk about and ended streaming election coverage.

11:53pm – Tammy Baldwin wins senate seat in Wisconsin. This is awesome because she is gay.

11:52pm – FOX: “We’re going to continue to lose jobs.” In order to “continue” doing something, it must be happening at present.

11:38pm – Fox is complaining that the system is gamed. Karl Rove says the Ohio call is too early.

11:36pm – Fox news is finally whining about the electoral college.

11:34pm I never thought I’d see the day when a state would legalize marijuana for recreational use. This brings a tear to my eye. Please release all those prisoners who are in jail for selling pot, Colorado.

11:25pm – Fox Newscasters are talking about how Obama wants to tax us is into oblivion and how  he is the worst president for the poor.

11:20pm – To all you teabaggers who said you’d leave the country if Obama got re-elected… You need some help moving out?

11:18pm – …but Romney has like a million more popular votes.

11:18pm – There go your guns and bibles! ABORTIONS AND GAY MARRIAGE FOR EVERYONE!

11:17pm – We’re not completely satisfied with these projections! Really? HE WON?

10:09pm – Romney wins in Missouri… of course. *angry but expected fist* I sure feel like my vote here doesn’t count for much. Blech.

10:07pm – Claire McCaskill projected to win Missouri! Legalization (not just medical) Marijuana is ahead in Colorado 54/46.

10:00pm – Polls are closed in all battleground states!

9:49pm – Fox Newscasters: “The president has to reach across the aisle.” He has!

9:34pm – Fox still hopes that people split the ticket in Ohio and maybe will vote for Romney.

9:28pm – Fox is showing brief numbers! Fox Newscaster is “surprised and saddened that Ohio is not looking out beyond its own borders”

9:27pm – Fox Newscasters talking about how if Romney does not get Ohio, it’s over. Yes.. That’s right Fox!

9:20pm – We switched back to Fox News because we are gluttons for punishment. They think Republicans will retain control in the house.

9:19pm – Romney pulling ahead in Florida.

9:04pm – Here’s a pic of JT and I using all of our screen clout to live-blog every few  minutes. Also cat. 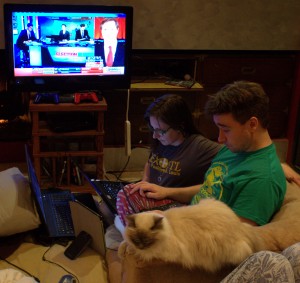 9:01pm – CNN: Kansas’ projected winner is Romney. I could have called that last week guys.

8:58pm – Obama has 78 electoral votes, Romney has 82. Also, churches are still being used as polling places. I have a problem with this.

8:56pm- Romney has written a victory speech, but not a concession speech. I hope he gives his victory speech anyway when he loses.

8:50pm – Amendment 8 falls in Florida, good news for the separation of church/state, bad news for Romney. 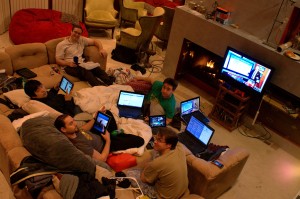 8:39pm – There is no more sad body language from Fox newscasters for us to smile at since we switched to ABC.

8:28pm – Fun fact: It might be illegal to post a picture of your ballot to social media sites? Check this out.

8:26pm – If you’re in a poll anywhere in the USA and they close, STAY IN LINE. They legally have to let you vote.

8:23pm – Due to Fox refusing to put up any freaking numbers, we’re switching back to ABC. Fox keeps saying that they’d be calling the election for Romney if Romney were “more inclusive”.

8:18pm – Aikin and Mourdock are being crushed in polls.

8:13pm – Newscasters: “Each side says they are going to win, but one side must know they are wrong.” Um… Ya think?

8:09pm – Fox Newscasters say: Hurricane Sandy was positive for Obama, but telling people to “vote for revenge” hurt him.

8:06pm – So far, Fox News it talking about Twitter. FOXNEWS: our job is to make it look like we’re winning!

7:51pm – We’re streaming ABC for the next 8 minutes until we switch to Fox.

7: 38pm – I listened to Fox News Radio while picking up my friend to bring him to our party and they are sure Mitt will win.

7:22pm – In Virginia, Dems are ahead in the preliminary polls.

7:18pm – This year the white vote is down and the Latino vote is up.  That bodes well for Obama.

7:02pm – I’ve got a great idea, nation; let’s do this the easy way.  Romney loses Florida early and we know who the next President is going to be before bedtime.  🙂

Ok, it’s closing in on game time.  Christina and I are ordering pizza and getting ready to chill with all of you guys.  We’ve settled on…*sigh*…Fox News, so please hang around in the comments and keep us company (and tell us what real journalists are saying).

November 7, 2012 The future of the Republican Party.
Recent Comments
0 | Leave a Comment
Browse Our Archives
get the latest from
Nonreligious
Sign up for our newsletter
POPULAR AT PATHEOS Nonreligious
1

The Ongoing Catholic Scandal: What the...
Roll to Disbelieve
Related posts from What Would JT Do?