The importance of “I don’t know.”

When it comes to grand questions of philosophy, never overlook a chance to admit you don’t know. It’s a perfectly acceptable position to admit to. Does “god” exist? I don’t know, which god? How did the universe come to be? I don’t know, but if you have a claim you better have evidence. Which politician has a better economic plan? I don’t know……….but does your fellow voter?

A new poll from Public Policy Polling found that an impressive 39 percent of Americans have an opinion about the Simpson-Bowles deficit reduction plan.

Apparently they do. It looks like at least 39% of Americans polled had a strong opinion about a specific plan for reducing government debt.This is good, right? An informed citizenship benefits us all.

Before you start celebrating the new, sweeping reach of the 2010 commission’s work, consider this: Twenty-five percent of Americans also took a stance on the Panetta-Burns plan

Competing plans provide options, that must be good, right? There is one downside to this though. When it comes to that Panetta-Burns plan:

its “a mythical Clinton Chief of Staff/former western Republican Senator combo” that PPP dreamed up to test how many Americans would profess to have an opinion about a policy that did not exist.

Awkward. Just keep in mind, their vote matters just as much as yours. 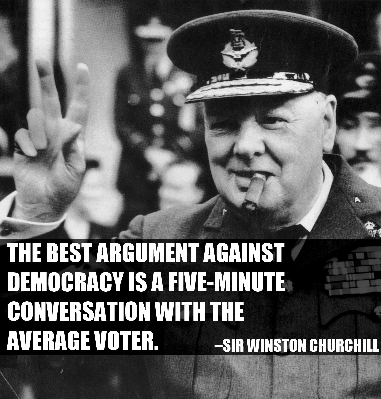 December 13, 2012
Jon Stewart on the failed disabilities treaty.
Next Post