Turns out child molesters want to work with children. Boy Scouts of America caught off guard by this.

Turns out child molesters want to work with children. Boy Scouts of America caught off guard by this. December 3, 2012 JT Eberhard 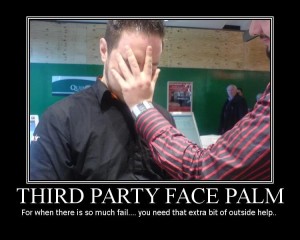 It turns out that one of the demographics who most wants to volunteer for organizations that work with children is child molesters.  This is not exactly rocket science.  So many of those organizations began running background checks on their volunteers ages ago.

Big Brothers Big Sisters ordered the checks for all volunteers starting in 1986. Boys and Girls Clubs of America recommended their use the same year.

One of the nation’s oldest and largest youth groups, however, was opposed — the Boy Scouts of America.

Scouting officials argued that background checks would cost too much, scare away volunteers and provide a false sense of security. They successfully lobbied to kill state legislation that would have mandated FBI fingerprint screening.

Well yes, background check do cost money.  It’s unfortunate that protecting young boys in your care from predators costs money, but it’s what you do because, presumably, you give a shit.  Food also costs money.  You pay for it because it’s important.

And yes, it will scare away volunteers…volunteers who have a history that suggests they shouldn’t be around kids.  That’s a feature, not a bug.

So, surprise, child molesters managed to get into the BSA in droves.

In 1989, a Scout committee chairman in St. Paul, Minn., decried the organization’s “half-hearted” screening in a letter to headquarters.

“BSA is only creating an illusion of performing what they claim,” K. Russell Sias wrote to Scout Chief Executive Ben Love. “It becomes quite clear that BSA is more concerned in ‘passing the buck’ than in accepting responsibility for those who are its adult leaders.”

That same year, a Las Vegas scoutmaster with a criminal history of exposing himself to boys was arrested for sexually abusing a 12-year-old Scout. One parent said casinos did a better job of screening workers.

“The black eye which scouting has suffered in this … could easily have been avoided if the council had taken the simple expedient of doing a background investigation,” the parent wrote to Scouting officials.

From the time national background checks became widely available in 1985 until 1991 — when the detailed files obtained by The Times end — the Boy Scouts admitted more than 230 men with previous arrests or convictions for sex crimes against children, the analysis found.

The men were accused of molesting nearly 400 boys while in Scouting. They accounted for one in six of those expelled for alleged abuse during those years.

Scouting officials declined to be interviewed but said in a prepared statement that they have enhanced their policies over the years and tried “to ensure we are in line with and, where possible, ahead of society’s knowledge of abuse and best practices for prevention.”

And now, the BSA is attempting to hide what happened.

The Scouts’ past handling of child sexual abuse has come under increased scrutiny since October, after the court-ordered release of hundreds of confidential files dating back decades. The Times earlier obtained and analyzed a larger and more recent set of files — about 1,900 dossiers opened from 1970 to 1991.

The records, dubbed the “perversion files” by Scouting officials, have been a key tool for nearly a century, intended to keep out men expelled for alleged abuse.

The files also offer a detailed record of the system’s failures. The Times reported in August that from 1970 to 1991 dozens of men previously expelled had slipped back into the program, only to be accused of molesting again. The Times later reported that Scouting officials failed to report hundreds of alleged abusers to police and often hid the allegations from parents and the public.

The organization has fought in court to prevent the release of more recent files, making it impossible to determine how many men with criminal histories were caught in the organization after 1991.

It is clear that looking out for the safety of the children in the BSA is a lesser priority than looking after their own asses with attempts to cover up the results of their inaction.  It seems that it’s not so much the issue that the BSA didn’t take responsibility, but that their failure to do so will make the BSA look bad.  Sounds a lot like the Catholic church.

I keep hearing that being religious makes people (and presumably their most prominent organizations) more moral.  Maybe it just takes a while…

December 3, 2012
Ashley Miller lost her father to racism.
Next Post