In the same notion as “Do True Believers™ wear seatbelts?”….what else are they up to?

Consider, if you are a True Believer™ you trust fully in your God’s protection. After all, this comes up every school shooting: 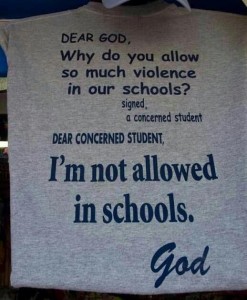 If only God was around to do what he promises:

Psalm 23:1-4 The LORD is my shepherd; I shall not want.  He makes me lie down in green pastures. He leads me beside still waters.  He restores my soul.  He leads me in paths of righteousness for his name’s sake.  Even though I walk through the valley of the shadow of death, I will fear no evil, for you are with me; your rod and your staff, they comfort me.

2Thessalonians 3:3 But the Lord is faithful. He will establish you and guard you against the evil one.

Isaiah 54:17   no weapon that is fashioned against you shall succeed,

Psalm 91:1-3   He who dwells in the shelter of the Most High will abide in the shadow of the Almighty.  I will say to the LORD, “My refuge and my fortress, my God, in whom I trust.”  For he will deliver you from the snare of the fowler and from the deadly pestilence.

2Timothy 4:18 The Lord will rescue me from every evil deed and bring me safely into his heavenly kingdom.

Psalm 138:7  Though I walk in the midst of trouble, you preserve my life; you stretch out your hand against the wrath of my enemies,

So, a person under God’s protection racket is safe from evil, all weapons, snare’s of fowlers, pestilence, and the wrath of their enemies. That’s a pretty slick deal, all for the low price of a lifetime of groveling and 10% to God’s henchmen.

So, how could we expect a True Believer™ to act, given their belief in promised divine protection?

The Arkansas House of Representatives has overwhelmingly passed a measure that would allow concealed guns to be carried in churches and houses of worship, and the governor’s office says it plans to sign the bill.

“A person should be allowed to carry a firearm in a church that permits the carrying of a firearm for personal security,” the bill reads.

Well, they’d arm themselves to the teeth of course! The faithful can pray with their pistol, and sing with their sawed off.  This is not the action of people who actually believe what they profess.

Every time the True Believer™ finds themselves in need, they immediately go straight to the only thing that actually works: Relying on themselves, and other humans.  Prayer doesn’t work, and they know it.