Bad Catholic thinks the conclave is pretty keen. I don’t.

It is very, very good to be Catholic.

By comparison to what?

We have the remarkable capacity to actually care about the conclave.

Atheists have the capacity to care, we just reserve it for things that truly contribute to human knowledge.  That’s not the conclave.  Ed Brayton sums up why beautifully:

The media, bless them, cannot fathom the explosion of love happening here, and are doomed to report with all the banality, divisiveness and cluelessness with which one goes about reporting an American presidential election.

Love for what?  It seems the only love exploding out of the Catholic Church is love for, well, the Catholic Church.  If there was love for anybody else involved, the decision to prosecute child rapists rather than cover up their crimes because the Church’s PR was so damn important would’ve been an easy one, even for Ratzinger and his subordinates (and recall, Marc thought Ratzinger was just peachy).

Marc then posts this bingo card, as an indictment on all the non-Catholics who just don’t get it. 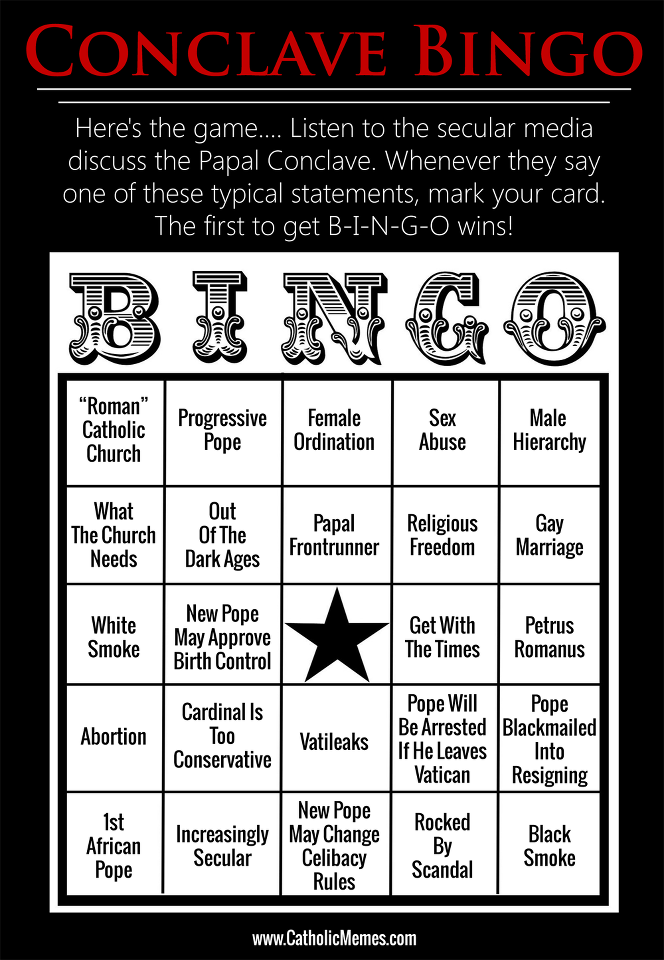 In Marc’s mind, it must be the fault of others that they are concerned with the Catholic Church being rocked by scandal, sex abuse (with children, don’t forget that part), or that their moral policies are medieval.  He has it backwards.  It’s Catholics who should be more concerned about these things, but instead they spend a tremendous amount of time and intellectual energy making excuses for why the Church should get a pass for these things (or for why others shouldn’t care so much).  The inhuman actions of the Pope and his flunkies are why we hate the Catholic Church, but the rationalizations by Catholics are why we hate it even more (and why Catholics make us shake our heads in disgust).

The attitude seems to be that the media and non-Catholics need to just quit caring about all these abuses of power and decency, not that the Catholic Church should stop doing them.

But to the Catholic, the conclave is not just a reportable event. It is that event which ensures the continued existence of the universe, and Eternity’s continued love for us fickle, finite creatures.

How’s that religion of humility working out for you?  If another Pope was never elected, the universe would continue on ticking and, frankly, would be much better for it.  Would we manage without proclamations to impoverished nations that condoms actually increase the spread of AIDs?  Would we get by without gilded thrones and staffs and money spent distributing bibles while children starve?  Could we survive without shielding child predators or people who hide political prisoners from human rights monitors?  If the old white dudes in their robes stopped chanting and muttering to themselves, we’d find a way to endure.  Somehow.

This is what it’s like to actually care about the conclave: To be stunned in the realization that God is among us, and to delight in the pomp, secrecy, and reverence that surrounds this intimate action of love.

The conclave is in no way even a terrible reason to believe god exists.  It is proof that a bunch of white people can get dolled up in robes and march about talking to themselves.  This should stun nobody, and it definitely shouldn’t count as the realization that god is among us.  If god were among us, he’d come down and pick out the next Pope himself.  But god’s not among us, and so mortals vote (and, again, that vote doesn’t look like it’s influenced by god in the slightest).

And delight in the pomp?  That’s why Jesus always demanded a red carpet, right?

And I’ll leave it to Catholics like Marc to delight in the secrecy.  I like transparency from my leaders.  I like making my decisions based on knowledge, rather than deferring to leaders who assert they want to keep me in the dark while simultaneously having me trust them.

And, lastly, reverence should be reserved for the truly wonderful and the breath-takingly beautiful.  Intimate love is a beautiful thing, but not a single Catholic has it with god.  At best, god has sent old white dudes who are forbidden from intimacy to deliver his message.  Imagine if your relationship with your spouse worked that way.  No Catholic has ever seen god or even shaken his hand, which means every Catholic has a more intimate relationship with their sock drawer than with god.  For those who find intimacy beautiful, the Catholic Church has actually attempted at every turn to suppress that intimacy unless it conforms to the preferences of a gang of supposed virgins who, until recently, served under a leader who shielded child predators from accountability.

Praising the Catholic Church for it’s appreciation of the beauty of intimacy is like admiring Rick James for his sobriety.

God bless this wonderful Church! God bless this Church that has clung to Christ for 2000 years and passed on his authority, unbroken, 266 times.

Yeah, passed it right on to Galileo.  What a bunch of empty, self-congratulatory bullshit from Bad Catholic.