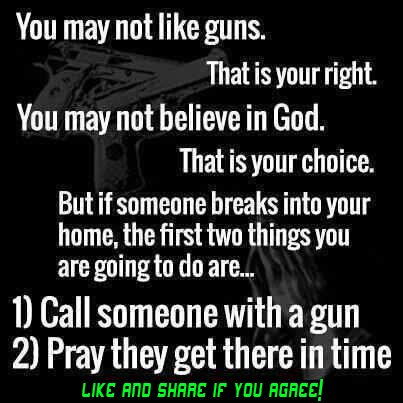 First thing to know: Every image that has “Like and Share” just wants you to drive up their page “engagement” score.

Second, think about what the message they wanted to convey here:

1. First, they setup a strawman, the anti-gun atheist. This strawman doesn’t want any guns or gods around!

2. Then, their hypothetical: You’re being attacked in your home!

3. Their solution: You’re not really an anti-gun atheist, when it comes right down to it, you want guns and god!

But what does this reveal about them, the pro-gun, pro-god poster of the image? When it comes down to their moment of need, the first thing they rely on? It’s not god. It’s not faith. It’s people. The very first thing they do in their fabricated emergency, is call people.

Because when it comes right down to it, they want the only thing that has ever actually worked….and that sure isn’t prayer.

March 29, 2013 Hoping to hang out with locals.
Recent Comments
0 | Leave a Comment
Browse Our Archives
Follow Us!