Scientists may have detected gravitational pull from other universes (and a long rant on a stupid comment).

Scientists may have detected gravitational pull from other universes (and a long rant on a stupid comment). May 30, 2013 JT Eberhard

The first ‘hard evidence’ that other universes exist has been found by scientists.

Cosmologists studying a map of the universe from data gathered by the Planck spacecraft have concluded that it shows anomalies that can only have been caused by the gravitational pull of other universes.

One of the comments on the article was entirely predictable.  It’s an old and bitter bromide, but it always comes up whenever science figures out how another facet of the universe works which, surprise, requires no appeal to god.

It’s the old non-overlapping magisteria argument and it always makes me think of this Jesus and Mo panel: 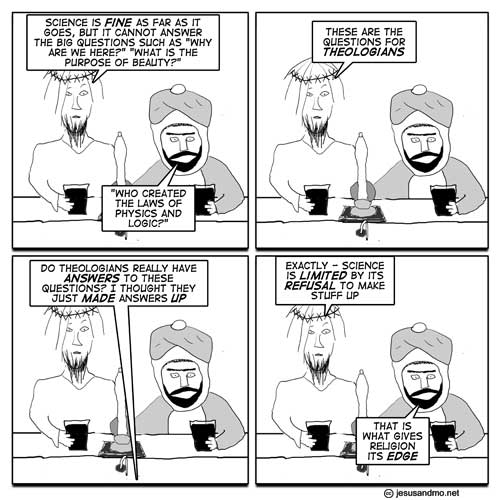 Religion just makes stuff up that is false by any sane definition of the word.  That is not how science operates.

The part of his comment that drove me the most crazy was:

Personally, I think that it is impossible to say anything ‘definitive’ about the existence of god. That question is unanswerable scientifically.

Yeah, when you create a god that is invisible to all means of reliable detection, that god is unassailable scientifically.  Of course, it’s also unassailable by any other means.  As Matt Dillahunty puts it: Either god exists or it doesn’t exist.  If a god does exist, it either interacts with the universe in some detectable way or it doesn’t.  If it doesn’t, that god is indistinguishable from a non-existent god.  That only leaves a god who interacts with the universe in some detectable way.  But if science, which is the greatest realization of the use of our senses to, you know, detect things, hasn’t found this god, that doesn’t say much for individuals.

In short, the god you’ve created is, in fact, undetectable by science.  The limits of science are not the province of religious knowledge.  Where science is ignorant, so is religion.  The only difference is that religion lacks the integrity of science.

While we know there is a what and how to the operation of the universe, who says that there must be a why or a purpose?  I submit that there is no reason to assume there is a purpose or a why to the functionality of the universe, and most certainly not an omniscient, perfect intelligence.  A look at the universe reveals it to be the work of a fairly incompetent engineer at best, as it took billions of years of trial and painful error to reach its current state.  A perfect designer would not require such a system.  It is also still riddled with a host of simple errors that are just what we would expect to see in a universe that operates on a series of mindless rules, but that are just bizarre if a god created anything.  These are things like the existence of the appendix, babies heads being bigger than the birth canal, and the clunky nature of DNA.

Furthermore, everything that we have explained has been found to have a natural rather than a supernatural explanation.  Everything.  You may respond that surely some intelligence put into place those natural explanations, but how do you know this?

What’s more, the god hypothesis and the atheist hypothesis predict different universes.  If a supreme intelligence created the universe we’d expect it to be efficient, not wasteful, and to contain the hallmarks of intelligence.  If all that exists are natural explanations, we’d expect to see a very old universe full of vast amounts of stuff interacting such that highly improbable things (like the origin of life) become likely in isolated pockets.  We’d also expect to see a wide array of flaws perceptible even to mortal minds (which surely can’t be expected to be as clever as a god).  The latter is the universe we find ourselves in.  So the question of multi-verses and what not does have relevance to the question of god’s existence.  And it most certainly has relevance to the truth of religions which claim the universe was created with us in mind.

Speaking of religions that claim the universe was made with us in mind (*cough* Christianity *cough*), when Christians say that science explains the how of the universe which is not religion’s purview, they’re full of shit.  The question “Did a man rise from the dead 2000 years ago?” is a question of Biology.  And the question “Did Jesus walk on water or transmute water into wine?” is a question about Physics.  The Christian faith makes a magnificent glory of how these propositions fly in the face of science, which is why they’re called “miracles”.  But science has the (obvious) answer to both of these questions, and religions have no sound evidence for why the natural order was abrogated in the ways they claim.  Far from tackling two different subjects, the overlap between the claims of specific religions and the conclusions of science leaves about as much room for compromise as a coin toss.

Even the differences in method between faith and science reveal why one is reliable and the other is just a set of baseless claims made with no accountability.  The very nature of making a truth claim implies some degree of testable prediction about the future.  A simple example would be the statement “I own a chess set.”  The implication here is that if you sift through every possession I own, amongst them you would find a chess set.  Science makes testable predictions in this vein;

And the success of a claim in science rests solely on how well the prediction is born out in reality.  Religion does no such thing, but still makes claims about how the universe really works and counts on people like the commenter in that article to not notice the difference.

The implication in this article is that whatever science discovers it is just explaining how god chose to do things.  Of course, while we need evidence before we accept claims of atoms, other universes, or black holes, the god that is claimed to be the source of all new scientific discoveries is just asserted ad hoc.  This is a sure way to never be disappointed in your pre-acquired beliefs, but it’s an equally certain way to believe a bunch of nonsensical garbage.  For instance, my belief that pixies authored the universe and put all the natural mechanisms in place remains strong, as every new discovery confirms and strengthens my belief by revealing a mechanism of the universe, which I know was put there by pixies.  If you have evidence for god’s existence like scientists have evidence for the existence of supernovae, present it.  Otherwise don’t think you can get away with saying your religious beliefs are in harmony with science and expect to get away with it unless your audience is just as scientifically illiterate as you are.

The universe does not need a who or a why – it appears to be chugging along just fine with its mindless processes and inanimate objects.  When we ask for evidence that the universe requires a purpose or a “why” we are not overstepping our bounds.  Do you have some manner of evidence that the universe has an ultimate purpose or was blasted into being by a god?  Show us.  But in science it is never noble to pretend to know things you do not (it’s even less noble to say we are overstepping our bounds by calling you on it).

May 30, 2013
Obama throwing down on climate change.
Next Post

May 30, 2013 Anne at the American Humanist Association Conference
Recent Comments
0 | Leave a Comment
Browse Our Archives
get the latest from
Nonreligious
Sign up for our newsletter
POPULAR AT PATHEOS Nonreligious
1