My take on the “10 awkward things” article. 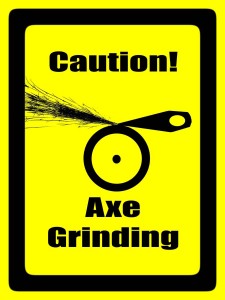 I saw Hemant take a swipe at the 10 awkward things about the American Atheists monument article and I just couldn’t resist piling on.  Baseless axe-grinding like Tom Hoopes’ article is like a sweet, sweet siren calling to me, and no matter how much I’d rather be doing something else I just can’t help but explain why they’re bullshit.

A quote on it says: “An atheist believes that a hospital should be built instead of a church.” Which is awkward, because we really haven’t seen all those hospitals the atheists were going to build …

Hemant already pointed out that atheists do not have the budget of organized religion.  Give it to us and see what happens.  We’re also not organized, since people don’t tend to organize around things they don’t believe.  This is why you don’t see hospitals being built by a-unicornists, even though there are tons of them out there.

What you do see are far more churches and other buildings that are functionally derelict than hospitals.  What you do see is money being spent on bibles or on preventing gay adults from receiving federal benefits for their relationship in lieu of being spent to feed the destitute or to cure the sick.  The whole point is that if you think a church takes precedence over a hospital your moral priorities suck – and that Christianity gets a whole lot of well-meaning people to a point where their priorities suck.

The hospital quote is also awkward because it clearly should have said: “An atheist believes that monuments to atheism should be built in all 50 states instead of a hospital.”*

At $6,000 per monument 50 monuments represents about $300,000.  You could hire maybe two doctors for that sum (for a year), and have nothing left over to rent even a storage space for the necessary medical equipment you wouldn’t have.  The dichotomy between monuments and hospitals is a foolish one.

However, the separation of church and state is a principle of paramount importance to a harmonious society.  It is unfortunate that funds must be expended when Christians break the law by mingling with the government (and when Christian officials in the government permit it) in order to oppose them, but you cannot rightly blame atheists as though they were the instigators.  That’s like blaming the government for wasting money cleaning up oil spills in the ocean without blaming Exxon for spilling the damn oil.

A quote on the monument says atheists “Want war eliminated.” Which is awkward because warriors like Stalin and Lenin and Mao and Hoxha and Ceaușescu – were all atheists.

As Hemant pointed out, surely nobody thinks that monsters like Stalin were cruel in accordance with some nebulous prescript of atheism in the way that men like Torquemada were motivated purely by the scriptures of their faith.  Stalin, for instance, sought power and initially suppressed the church because they backed the wrong political players.  However, once the church came to support Stalin it was revived under his leadership (I’ve written about all of this here).

Because we deplore cruelty, virtually no atheist approves of Josef Stalin.  We feel no allegiance to Stalin because he didn’t believe in god, we loathe him for his malice.

The monument also mocks the punishments threatened in the Old Testament. Awkward: Far worse brutality was actually committed by the atheist warriors listed above – in our lifetime.

And monsters like Stalin and Mao are deplored by virtually every atheist on the planet, and rightly so.  However, Christians still worship the monster of the Old Testament who commanded that anybody who works on Saturday should be killed along with homosexuals and non-virgins.  Countless Christians will still say “Oh, the NT changed the rules” as if they think it was moral to kill people for those reasons at the time.

Atheists at least make good on our claim of loathing the cruelty of men who killed millions.  Christians never stop worshiping the orchestrator of worldwide genocide by drowning as described in their book.  To the atheist mass savagery is to be deplored no matter the source.  Christians have shown they’re willing to approve of evil.

The “We want war eliminated” quote is also awkward because all of the other quotes on the monument are from Founding Fathers known for starting a war with England.

Yes, war is sometimes necessary.  That doesn’t mean we don’t want a world without the things that make war occasionally necessary.  For the record, something that makes war necessary is not conflicting opinions about god’s will (see most wars throughout history).

It’s awkward that at the dedication, a preacher used the monument to preach Christ, and the free thinkers got mad at his free thinking.

Hemant hit this one more perfectly than I ever could when he said:

Who got mad? Annoyed, maybe, that a Christian was trying to steal the spotlight. Upset, maybe, that Eric Hovind was standing on the monument before it was properly settled into its foundation. That’s about the extent of it. When loudmouth Christian preachers try to make their case in public, it only helps the atheist cause.

Stupid other bloggers saying things better than me.  It fills me with rage, honestly.

Anyway, to continue with Hoopes’ article:

It’s awkward that the monument has what looks like a biohazard symbol on it.

There are lines…and it’s symmetric…so I guess they have that in common.  Of course, by that logic, the Christian cross looks like a “Do Not Enter” sign.

But the symbol actually shows an atom. J.J. Thomson won the 1906 Nobel Prize in Physics for discovering the electron. He was a churchgoer who read the Bible every night. Which is awkward for atheists.

Why is that awkward?  Nobody has ever said that Christians are incapable of doing good science.  What we have said is that the claims of Christianity are in conflict with science.  They are.  You can’t think biology gets things right and conclude that someone rose from the dead on account of it.  Ditto walking on water with physics.  Ditto people turning into pillars of salt and chemistry.

Do you think that Thompson believed in the bible for scientific reasons?  If so, one can only wonder why he submitted his work with the electron to scientific peer review but never his proof of god.

Actually, one doesn’t need to wonder at all.  He had science to support one but not the other.

A quote on the monument says “An atheist strives for involvement in life and not escape into death.” Awkward: atheists Jack Kevorkian (Dr. Death) and Derek Humphry (founder of the Hemlock Society) would disagree.

It would only be awkward if Dr. Kevorkian made a habit of killing people in perfect health who were enjoying life and not aging people who were bound to experience little but pain until they died.  But he didn’t.  Believing a person doesn’t need to suffer needlessly is not in conflict with thinking that there is much joy to be found in experiencing different things in this life (which is why we glare at Christians when they try to arbitrarily limit what experiences a person can have, all on account of their belief in a later escape through death).

Also, consider all the reasons in the bible for a person to be brutally killed even in their youth, snuffing out their involvement in the one life they’re guaranteed, and then take a moment to bask in the irony of somebody like Hoopes ragging on Jack Kevorkian for daring to give the terminally ill a painless death.

A New Jersey-based group went to Florida to build an atheist monument. That sounds kind of … missionary and proselytizing. Which is awkward for people who are against that kind of thing …

Oh snap!  A national organization went to the place where a prominent church/state violation was taking place in order to confront it.  I guess when a police officer leaves the station to shut down a meth lab, to Tom Hoopes that sounds kind of like crime.  Did Hoopes really think that correlation was going to fly?

Of course he did.  All you need is a cross around your neck and people who agree with you on Jesus will gloss over all kinds of things.

July 3, 2013 Documentary "Refusing My Religion" coming soon.
Recent Comments
0 | Leave a Comment
Browse Our Archives
get the latest from
Nonreligious
Sign up for our newsletter
POPULAR AT PATHEOS Nonreligious
1