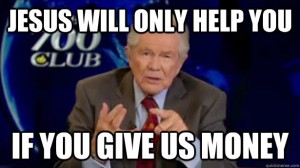 Pat Robertson got asked how one should deal with pictures of same-sex couples kissing on facebook.  Somehow the answer was “wish for a ‘vomit’ button” instead of “close the fucking picture if you don’t like it”.

You’ve got a couple of same-sex guys kissing, do you like that? Well that makes me want to throw up,” he said.
“To me I would punch ‘Vomit;’ not ‘Like,'” he added.

Robertson: Males tend to wander 2010: Pat Robertson: Haiti is cursed Robertson slams ‘awful-looking’ women
“But they don’t give you that option on Facebook.”

It’s not the first time Robertson, 83, has used vomit to express his sentiments on homosexuality.

Robertson has also said the land would “vomit out” those who disobeyed the commandments of the Old Testament.

A being who kills all but eight people on earth via drowning?  Hand pat a “worship” button.

A being who commanded his followers to kill people who worked on Saturday, non-virgins, and more?  No vomiting.  Maybe if there was a “love more than anything in the universe” button.

It seems there is no crime sufficiently grisly to replace Pat Robertson’s adoration of the monster of the bible with nausea.  But two consenting adults kissing?  To Pat that’s a greater crime than murdering scores of people, mostly Christians, via hurricane in response to gay pride parades.

And this guy has more followers than PZ Myers.  They regularly listen to this insanity and keep tuning in to Pat Robertson for advice.  Religion makes people better?  Yeah, and arsenic makes your heart stronger.

July 8, 2013
God's burning orphanage and the problem of divine hiddenness.
Next Post