Kansas City Atheist Coalition turned away as volunteers for feeding the poor.

For the last several years the Kansas City Atheist Coalition has provided the Kansas City Rescue Mission with, by far, it’s largest group of volunteers every Thanksgiving when the group distributes meals to the poor.  This includes driving meals to residences and other work.  Here’s a picture of me and Michaelyn last year volunteering: 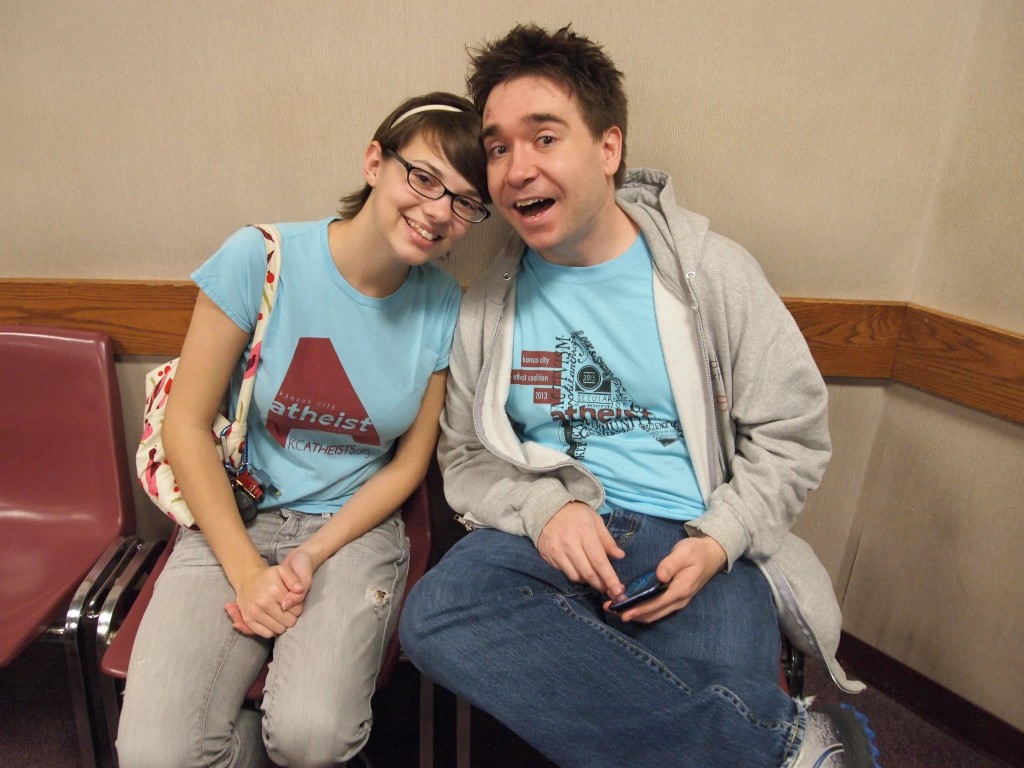 And this year they were primed to do it again.  But something this year was different.  For a month the leaders of KCAC attempted to contact the KCRM to tell them how many volunteers they’d have this year and to work out details, but received no communication in return.  This went on for an entire month, before finally a missive was received in return:

The reason is unfortunate: Kansas City Rescue Mission has decided to use the meals they deliver as a chance to proselytize to its recipients by inserting religious literature into the meals. They informed us that we “would not be a good fit” (emphasis theirs) for volunteering with them, and declined to respond to any further inquiries.

The situation is simple: they have decided to be less efficient at feeding the poor so they can proselytize to the people they still manage to reach without their largest contingent of volunteers.  There are a few things to say about this…

1.  A Christian, wishing to show how Christians are oh-so-charitable and atheists are not, could point to the KCRM, unaware that their Christianity actually inhibited the amount of good they were able to do (and how it allows those responsible for the inhibition to think they’re actually doing more for these people).  This is far and away not the only time religion actually mangles charity in this way.

2.  Including messages of god’s love with a meal to the poor is ironic in the extreme.  If god cared about them at least as much as the KCAC volunteers, there would be no need for dispensing meals to the needy – god would’ve taken care of it.  Instead he’s left it to humans who care to do what god can’t be bothered to do himself, despite how much easier it would be for god.  The real message is that god, if he exists, created the concept of need and suffering and included them in his design and that he doesn’t think this was a mistake (otherwise he’d fix it).  But people?  People do care, and people do love, but that sometimes their care and love can be diminished in the servitude of an uncaring god’s image.

This highlights another difference between me and god: if I can do something to help the needy, I do it.

It also highlights a difference between atheists and Christians: our primary goal is helping as many people as possible.  Often, their primary goal is spreading their faith, with alleviating suffering coming in somewhere behind that.

The people who denied the atheist volunteers (and who left them hanging in silence for a whole month) should be ashamed, and probably would be if not for their faith telling them they should be so damn proud.

November 10, 2013 Good to see the family again.
Recent Comments
0 | Leave a Comment
"You don't seem to get it. The bible is quite interesting and says some true ..."
plantman13 Am I evil for pointing out ..."
"Totally different pope. This post is nine years old."
William Holy fuck
"Meanwhile, the BBC proudly announces that the Pope will enlighten its UK audience with his ..."
Broga Holy fuck
"He was testing the new Church policy! Yeah, that's it..."
Raging Bee Holy fuck
Browse Our Archives
get the latest from
Nonreligious
Sign up for our newsletter
POPULAR AT PATHEOS Nonreligious
1