RELEASE THE HOUNDS! It’s the War on Christmas!

RELEASE THE HOUNDS! It’s the War on Christmas! November 21, 2013 christinastephens

It happens right under your nose. In bunkers across the nation, Christmas-hating people are training.

There is a war going on. A war to wipe the holy Christian holiday known as Christmas from the face of the planet, starting with the very center of the universe: the USA.

Every year, the secularists take their shots. One by one, Christmas trees fall, browning into in a sad tangle of ornaments and pine leaves. If they win, the secularists will take over. Instead of months of christmas carols serenading us in retail establishments, there will be Atheistmas music. Instead of baby Jesus, there will be dead baby kittens.

However, one news organization is at the forefront of this War, braving bullets and sweat and tinsel to give you the hardest hitting news that ever landed on your doorstep.

This potent band of journalists (and concerned comment-section citizens) bravely hang wreaths on their doors and erect nativity scenes, even under constant threat from secularists.

This year, Fox has laid out a map to pinpoint the eradication of Christmas, boldly marking each incident with disproportionately sized Nativity scenes.

Here it is.  Be warned, what you might see by clicking that link could disturb you. 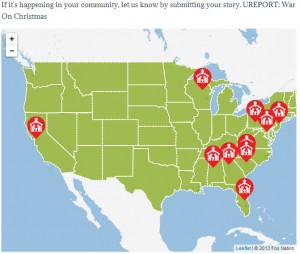 Fox says to, “Click the icons on the map to see where the latest challenges to religious freedom are taking place.” so I did. Here is what I found. In case you are too afraid to click for yourself, I will now describe some of the early casualties of the War on Christmas.

1. California: The Gap has decided to use the phrase “Merry Christmas” in their advertising. In previous years, they have stuck to more neutral words, but are now including many holiday-related phrases.

Why this is a War on Christmas: From after Halloween to a week after New Years, any and all references to holidays other than Christmas is a grievous attack. Their previous attacks on Christmas have not gone unnoticed, and so we side-eye them with vigor. Watch out.

2. Wisconsin: At a local public high school, a choir director was told “choirs could perform one sacred song for every five secular songs performed; eliminate all Christmas music or postpone December concerts.”

Why this is a War on Christmas: One in five songs which promote a religion isn’t enough. We need more and shouldn’t be limited in our ability to  proselytize to students through song in a public school.

3. Alabama: A republican has introduced a bill which “expressly state[s] that teachers are allowed to say “Merry Christmas,” “Happy Hanukkah” or “Happy Holidays” to their students. ”

Why this is a War on Christmas: It uh… wait, actually this is a preemptive strike against those evil secularists who might one day try to pass a bill forbidding teachers from saying holiday greetings to their students. Take that evildoers!

4. Georgia: A school elected not to sing Christmas music during the upcoming holiday program.

Why this is a War on Christmas: If it’s not specifically a song singing the high praises of baby Jesus, then it’s a horrific attack on baby Jesus. You, by reading this and not singing about baby Jesus, are currently attacking him, you meddlesome secularist you. You better start singing. NOW.

Why this is a War on Christmas: Operation Christmas Child in it’s mission statement specifically states that the purpose of OCC is to help people with tangible items in order to “Promote the gospel of our Lord Jesus Christ. The charter school could have picked a secular charity instead, however if you’re not exclusively for Christmas, then you’re against Christmas. there can be no neutral ground.

6. South Carolina: A private prep school has a policy which does not allow religious music at holiday concerts.

Why this is a War on Christmas: Because even private schools must bow to the whims of the religious parts of Christmas. They must sing songs about baby Jesus or else they are clearly attacking baby Jesus.

Why this is a War on Christmas: VICTORYYYYYYY!!!!  …but we side-eye them just the same, do not let your guard down. Who knows what shenanigans they might try, like including a hanukkah display.

8. Pennsylvania: Salvation army worker is using a smaller bell or singing because his large, loud bell was annoying a business owner nearby.

Why this is a War on Christmas: Because we should be able to have the biggest, loudest bell we want, even if it annoys everyone around us.

9. DC: Obama put pictures on his twitter and Facebook page urging people to talk to their relatives this holiday season about healthcare.

Why this is a War on Christmas: Because Obama.

Why this is a War on Christmas: Because remaining neutral regarding religion during the Christmas season is a vicious attack on baby Jesus. It’s also a war on Hanukkah, but that’s okay because they are our enemies too.

11. Maine: a town council voted to remove a Battle of the bulge war memorial.

Why this is a War on Christmas: because the Battle of the bulge took place around Christmas, and the soldiers probably thought about baby Jesus. (<–this is not satire. They actually said that. Oh crap, I broke character!)

12. New York: Police request that bars not serve alcohol to people dressed as Santa during a “Santacon” pub crawl.

Why this is a War on Christmas: Because drunk and disorderly Santas are so much better at delivering Christian Christmas cheer than sober Santas!

I am sure more grievous attempts to crush poor Christmas will surface. Batten down the hatches!

November 22, 2013 Your morning happiness: penguins chasing a butterfly.
Recent Comments
0 | Leave a Comment
"Ben, can you update your broken links? Thanks!"
afAtheist The New Atheists are still right ..."
""Nothing in the world has anything to do with you" is inaccurate if we are ..."
Sean Reesor Taylor Mali: Do Not Think of ..."
"6 years ago or 6 minutes ago: The scriptures are God's word, Sin is still ..."
usnavyvet FAITH & GAY RIGHTS: Missouri megachurch ..."
"https://evolutionnews.org/2..."
Gerald McDonald Disproving Evolution – Part 15 – ..."
Browse Our Archives
get the latest from
Nonreligious
Sign up for our newsletter
POPULAR AT PATHEOS Nonreligious
1

The Southern Baptist Convention Faced Serious...
Roll to Disbelieve
Related posts from What Would JT Do?

Nonreligious
The top 10 anti-Christian acts of 2013
What Would JT Do?

Nonreligious
Sylvia Browne, Psychic, has died
What Would JT Do?
TRENDING AT PATHEOS Nonreligious