Oh hot apple cider, you are the true savior…of my sore throat.  This is part of why I don’t believe in god: I have a hard time believing the same dude who created malaria, AIDS, cancer, and Glenn Beck also created hot apple cider.

Anyway, this cartoon made by somebody who skipped their intro-level biology class in high school to shoot up on Jesus has been floating around the internet: 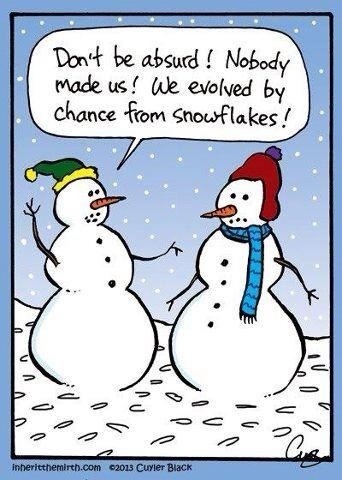 Making fun of evolution because non-self-replicating molecules don’t produce complexity is like making fun of your Big Mac because it doesn’t pick up FM stations (and feeling like you’re oh-so-clever for doing so).  The irony is that the scientifically pig-ignorant clod who drew this picture (and the equally obtuse people who shared it) probably think their opinion about science education should supercede that of the scientific community.  Thus is the confidence that is so frequently married to ignorance.

December 6, 2013
Jon Stewart on this year's war on Christmas.
Next Post