Person asking county to abide by the law should be “run out of town on a rail” by good Christians.

I saw this woman posting on the KTLO page about the nativity scene in Baxter County this morning.  Her name is Joanna Baxter-Farris, which I would blur out except she doesn’t seem to care much for anonymity.  Her facebook status about it is…disgusting. 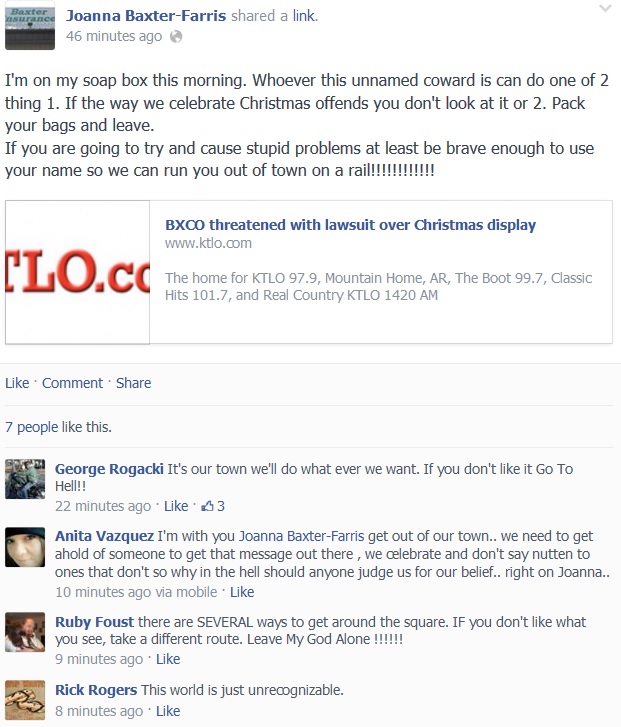 So it begins.  Gee, why would anybody want to stay anonymous when asking Christians to not break the law or asking the government to represent everybody equally?  Because of what Christians will do to them, harassment and more, if they only knew.  What a reprehensible bunch of people.  One person asks for equal representation, they announce that they’ll make a person’s life miserable if only they had the chance, and somehow it’s the citizen who asked for equal representation who is the bad guy.  These people are fucked up.

The atheists are saying “we’ll win in court”.  Here we have Christians who don’t even mention the law, but are expressing how willing they are to make somebody’s life miserable if they don’t get their way.  Their first thought is not “Oh, the law is on our side, so let’s win fair and square”.  Instead, it’s to harass the person who does have the law on their side.  This is not love or even maturity: it’s mob mentality.  Tell me more about how Jesus makes people more compassionate, understanding, and moral.

I’m on my soap box this morning. Whoever this unnamed coward is can do one of 2 thing 1. If the way we celebrate Christmas offends you don’t look at it or 2. Pack your bags and leave.
If you are going to try and cause stupid problems at least be brave enough to use your name so we can run you out of town on a rail!!!!!!!!!!!!

As for your first, Joanna, no atheist gives the first shit about how you celebrate Christmas.  You can tell because nobody is barging into your house to take the Jesus ornament off your tree.  What we do care very much about is equal representation.  If the government is allowing Christian displays but denying everybody else, that’s unequal treatment and it is illegal.  Move the creche onto private property and you won’t hear a word, because the problem isn’t with our offense at how you celebrate something, it’s with our government officials breaking the law (which should worry you as much as us, and would if you weren’t so eat up with Jesus that you can’t even frame the situation accurately or honestly).

And as for your #2, how hateful.  The proper response to asking your representatives to abide by the law is not to make their lives miserable.  What a positively wicked, malicious proposition.  The problem of the government giving preferential treatment to one religious sect is not a “stupid problem”.  Sadly, neither is the prospect of Christians threatening people when they don’t get their way (which requires jettisoning the Constitution).  That problem is very real.

It’s our town we’ll do what ever we want. If you don’t like it Go To Hell!!

It’s not your town.  What an egotistical thing to say.  It belongs to everybody who lives here, including the non-Christians.  The government of this town must represent them all equally and not give preferential treatment to one religious group.  If you don’t like it, consider moving to a theocracy like Saudi Arabia where your attitude is more respectable.

If you don’t like the Constitution, perhaps America just isn’t the place for you.

But George’s attitude is very revealing: this seems to be the point of view espoused by gaggles of Christians every time an atheist asks the government to represent all its citizens equally – regardless of the law, Christians should be able to do whatever they want.  How arrogant.  How selfish.  How absolutely contemptible of equality and compassion.  How thoroughly incompatible the basic ideals of this country (and with fairness, for that matter).  Yet these are the fruits of Christianity, revealed in every tantrum thrown by grown-ass adults whenever they don’t get to bully everybody else in “their town”.

Anita Vazquez cheers on Joanna’s call to fuck up somebody else’s life because Christians are unwilling to move their creche 20 yards to private property:

I’m with you Joanna Baxter-Farris get out of our town.. we need to get ahold of someone to get that message out there , we celebrate and don’t say nutten to ones that don’t so why in the hell should anyone judge us for our belief.. right on Joanna..

It is not your town.  Christians are not the only citizens in America, though by just looking at this lot they may be the most self-centered citizens.  Nobody cares if you celebrate.  Nobody wishes to stop you from believing (at least, not by force of lawsuit).  We care that our representatives are not abiding by the Constitution.  This would bother the Christians too if they cared about fairness more than getting their way.

And it bears repeating: how completely cruel to be willing to harass a person to the point of leaving because they think the law is being broken and alerted the proper people.  How positively despicable.

Ruby Foust came charging in with:

there are SEVERAL ways to get around the square. IF you don’t like what you see, take a different route. Leave My God Alone !!!!!!

Ah, the random capital letters.  This is how you know their faith is strong.

You’ll notice, Ruby, that the complaint was not levied against god.  That’s because your god isn’t the issue here.  The issue is your elected representatives who don’t get to be left alone when they’re failing their duty to all their citizens.  If they were giving preferential treatment to another religious group and denying Christians the same treatment, you’d be livid (and rightly so).  The problem here is that your Christianity seems to have deprived you of the empathy necessary to imagine how it would be for others.

These people are behaving horribly.  They seem to have had their competence and their kindness ripped out of them.  You can tell about their competence because they cannot accurately depict what is going on.  A county judge treated Christians better than others by allowing Christians space on public land but rejecting everybody else.  This is illegal.  It has nothing to do with us being offended (aside from being offended when our elected officials ignore the Constitution, which should offend Christians too), and it has nothing to do with keeping you from seeing nativity scenes (you can tell because nobody is filing foredoomed lawsuits or complaints against creches anywhere else, like on church lawns), so framing it as if atheists are just picking on you is ridiculous (so ridiculous that one might think the believers were being intentionally obtuse).

And you can tell about their loss of kindness by how frothing at the m0uth they are to harass and otherwise make somebody’s life miserable rather than simply having their day in court (which they will lose because Judge Pendergrass is breaking the law).  It seems more than clear that it is their Christianity which has deprived them of their basic competence and a minimal amount of compassion.  It also seems abundantly clear that it is their Christianity that has made them proud of this and convinced them that their embarrassing eagerness to be cruel amounts to an enviable sense of morality.  Truly, Christianity has kicked them loose of reality.

And nobody can say that these are a few bad apples.  This is the result we can always expect every time somebody challenges preferential treatment given to Christians.  It is as reliable as the rising sun, because Christianity does not make people better – it turns many of them into simpering children who consider cruelty justified.

Thought I was done, but then this comment got posted from Gregory Johnston:

mmmMMMmmmm…what would Jesus do?  Also, English is apparently really hard for REAL AMERICANS.

I don’t even need to break down how ignorant and scary this is.  When was Jesus going to get around to making this guy not stupid as a fucking stump, not violent, and not racist as hell?  Given the frequency of this type of comment, one might almost think it was faith that lends itself to this type of astounding ignorance, potential for violence, and racism.

get the latest from
What Would JT Do?
Sign up for our newsletter
POPULAR AT PATHEOS Nonreligious
1