The decline of religion in the last 60 years is the greatest in history.

The decline of religion in the last 60 years is the greatest in history. January 29, 2014 JT Eberhard

Religiosity in the United States is in the midst of what might be called ‘The Great Decline.’ Previous declines in religion pale in comparison. Over the past fifteen years, the drop in religiosity has been twice as great as the decline of the 1960s and 1970s.

How do we track this massive change in American religion? We start with information from rigorous, scientific surveys on worship service attendance, membership in congregations, prayer, and feelings toward religion. We then use a computer algorithm to track over 400 survey results over the past 60 years. The result is one measure that charts changes to religiosity through the years. (You can see all the details here).

And here’s the lovely, lovely graph. 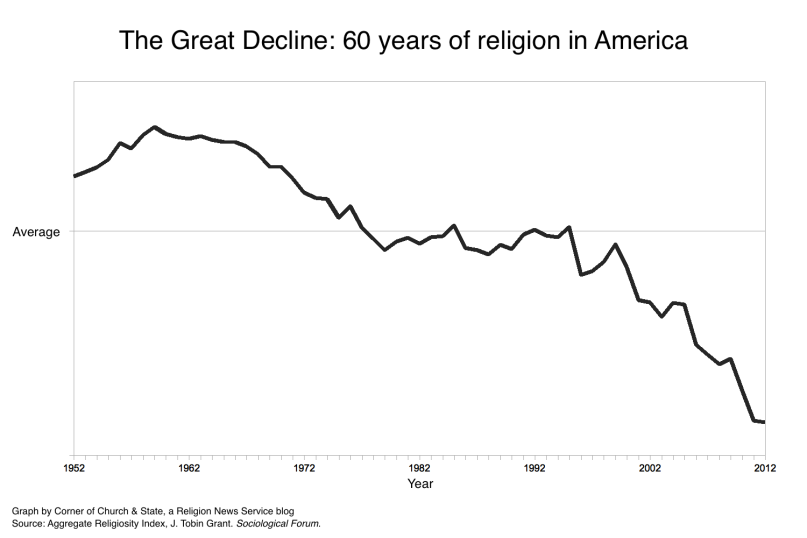 And the best part?  Without de facto respect, religion crumbles.  I don’t see a way for religion to ever regain enough power so that it can demand respect – it must earn it, and in a world full of increasing knowledge where questioning is bound to continue, I don’t see that line graph ticking up anytime soon.

January 29, 2014
"Patriots" to descend on Washington to demand the resignation of the President in a flood of impotence.
Next Post

January 29, 2014 South Dakota Representative thinks religion should grant immunity from discrimination laws.
Recent Comments
0 | Leave a Comment
"Ben, can you update your broken links? Thanks!"
afAtheist The New Atheists are still right ..."
""Nothing in the world has anything to do with you" is inaccurate if we are ..."
Sean Reesor Taylor Mali: Do Not Think of ..."
"6 years ago or 6 minutes ago: The scriptures are God's word, Sin is still ..."
usnavyvet FAITH & GAY RIGHTS: Missouri megachurch ..."
"https://evolutionnews.org/2..."
Gerald McDonald Disproving Evolution – Part 15 – ..."
Browse Our Archives
get the latest from
Nonreligious
Sign up for our newsletter
POPULAR AT PATHEOS Nonreligious
1

Russell Moore Wants Authoritarianism, Just Without...
Roll to Disbelieve
Related posts from What Would JT Do?