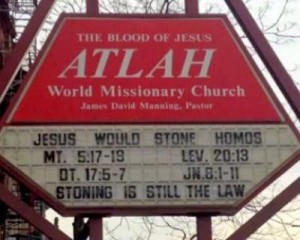 I can’t help but notice that this nut hasn’t been arrested for attempted murder yet, which means he’s all about other people, not himself, stoning homosexuals to death:

James David Manning, a pastor from New York City, is calling for Christians to stone gays.

‘Jesus would stone homos. Stoning is still the law.’

According to the site Joe My God Manning said in a YouTube video that Christians who do not attack gays are ‘advocating lawlessness. Stoning of the homos is now in order. Stoning is still the law.’

The sad thing is that the implied conclusion is “Then we should too!” and not “God and Jesus sound like assholes who should be opposed, not obeyed.”

And, like I said at the start of the post, we’re still waiting on James David Manning to cast the first stone.  It’s god’s will, after all, but jail is just so uncomfortable…

I wonder how many Christians agree with him, but only silently.  There is, after all, a swelling of support among evangelicals for anti-gay Russia where gay people are beaten, and Uganda where gays are imprisoned for life.  I wonder if those people really draw the line at stoning.

March 18, 2014 Your morning happiness: dawgs!
Recent Comments
0 | Leave a Comment
Browse Our Archives
get the latest from
Nonreligious
Sign up for our newsletter
POPULAR AT PATHEOS Nonreligious
1

Children of God cult member jailed for sexually...
DEREK Lincoln, above, was handed an 11 year and six months sentence...
view all Nonreligious blogs
What Are Your Thoughts?leave a comment
Copyright 2008-2020, Patheos. All rights reserved.