My brother has a different approach to internet debate than my father.

My brother has a different approach to internet debate than my father. May 15, 2014 JT Eberhard

With marriage equality coming to my home state of Arkansas newspapers across the state are being inundated with articles and columns about the subject.  My hometown paper ran an article about where in the state same sex couples could still tie the knot since stays started getting issued.  Of course a true god warrior, Vicki Oels, found her way into the comments to tell everybody how her big friend in the sky is going to fry them all for not being bigots in their terrestrial lives.  Her first salvo was:

The people voted on this issue and it should not be vetoed or set aside by any judge. Moral standards for this have been in place since the beginning of time – put in place by God. What man decides to allow or not allow does not change God’s authority – What a shame and disgrace to our country or any country that would even want to “legalize” such a thing. No matter how many “laws” are passed to support it, this will always be a sham and pretense. There is only one kind of marriage that God recognizes and no other – between a man and a woman. We would do well to do the same!

My father and my brother both chimed in.  My dad keeps a perpetually Sam Harris-like calm in his comments:

About “For a judge to just say I can’t find a reason to support the people’s vote, that’s not a good thing.” I am disgusted with hearing what the “majority” voted for. What is wrong is that “what the “majority” voted for was unconstitutional. Here is a tip: if it isn’t constitutional, then it isn’t a “good law”, and asserting that it is doesn’t make it one. If the majority were to vote that people named Canda couldn’t obtain a civil marriage license, that wouldn’t be constitutional, either. Hopefully, putting the situation in personal terms like that will help explain it to those who refuse to understand it otherwise.
*
Judge Piazza DIDN’T “just say I can’t find a reason to support the people’s vote”, he actually found reasons through legal precedents to proclaim the people’s vote to be unconstitutional. Anyone who actually read the decision would know that. One of the precedents he specifically cited was Loving v. Virginia, 1967.
*
The “majority” is very capable of voting their personal prejudices into law, and the equal rights of minorities are protected by the constitution, regardless of what bias and discrimination the “majority” may want to vote into law.

” There is only one kind of marriage that God recognizes and no other – between a man and a woman.” This isn’t about what kind of marriage is recognized by anyone’s gods: not Allah, not Jehovah, not Shiva, not Pikkiwokki. It is about CIVIL marriage……marriage recognized by the government for the purpose of extending equality to American citizens. We do not live under the laws of either the old or new testament, the Koran, or the Bhagavad Vita; we live under the Constitution of the United States of America. This isn’t a theocracy: government based on religion. If you want a theocracy, move to Iran…..that is what they have for government. It is a sorry form of government, and we don’t need it here.

Vicki came firing back with:

WHAT ABOUT HOMOSEXUALITY?
June 26, 1977 was proclaimed national “Gay Day.” In various cities like Los Angeles, Chicago, Atlanta, and others, “gays” staged a parade for “gay rights.”
What is your attitude toward “gays” or “gay rights?” Do you believe this is a proper or valid way of life? Are you sympathetic with them, believing they shouldn’t be hassled and should be free to do their own thing? Or, do you actively oppose the movement? Particularly as we constantly see states allowing single sex marriages and issues being challenged under non discrimination laws. Consider the following points in establishing your attitude.
1. God has always viewed homosexuality as sinful. Our introduction to this sin is Genesis 19:1-25. While Lot entertained two angels in his house, the men of Sodom came and demanded to: know” (the verb “know” mans to have sexual relations with) his house guests. Lot offered the men of Sodom his daughters but they refused. They were perverted; they wanted men! The name of “Sodomy” was taken from the sin of? Sodom and those who practiced sodomy were known as Sodomites.
2. Homosexuality cannot exist where there is respect for God. Paul in Romans 1 describes the sinfulness of man who refused to honor God. Read carefully Romans 1:26-27. Because of their refusal to obey God, “God gave them over to shameful lusts.” If a man loves and obeys God, homosexuality will not exist.
3. God will not tolerate homosexuality even if it is legalized. Recently I read of homosexual church in California with a homosexual minister. The church had 350 members of which 70 per cent were male homosexuals, 15 per cent were lesbians and the rest were friends and relatives.
Some want to believe the question is one of “gay rights.” The real question is one of morality. The passing of a law does not change God’s law. Paul still says this is “shameful lust.” It is SIN! We must oppose it on the basis of it being morally wrong.
See ya Sunday,

This one belonged to my brother, who has a very different approach than my dad: 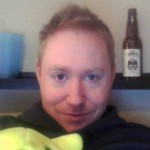 WHAT ABOUT NOT EVERYONE BELIEVES IN YOUR FAIRY TALE?

You can quote scripture from a book written by bronze age goat-herders until you turn blue in the face. This is the 21st century. People aren’t ruled purely by faith and superstition anymore. The straight fact is, not everybody acknowledges the sovereignty YOUR particular god, so until you and your ilk stop trying to govern peoples’ lives by your personal religious doctrine, they’re going to oppose you. They’re going to fight back. There’s a culture war and you’re losing it steadily because of self-righteous discrimination against people who are perfectly normal, just different from you.

The capacity of a judge is to “judge” the constitutionality of laws based on, wait for it, the constitution of the United States, not your interpretation of a set of nebulous standards for morality put in place by your version of an invisible man in the sky.

Now that’s some fine wording right there.  “…self-righteous discrimination against people who are perfectly normal, just different from you.”

I’m not sure which style I like more, but they’re both damn good at what they do.

May 15, 2014 Help send a deserving young woman to Camp Quest.
Recent Comments
0 | Leave a Comment
"Totally different pope. This post is nine years old."
William Holy fuck
"Meanwhile, the BBC proudly announces that the Pope will enlighten its UK audience with his ..."
Broga Holy fuck
"He was testing the new Church policy! Yeah, that's it..."
Raging Bee Holy fuck
"Is 7522 your prison number?"
Mourning Warbler Anti-gay side tells the SCOTUS we ..."
Browse Our Archives
get the latest from
Nonreligious
Sign up for our newsletter
POPULAR AT PATHEOS Nonreligious
1

Nonreligious
All-day stream: Resident Evil 7.
What Would JT Do?
TRENDING AT PATHEOS Nonreligious