SCOTUS rules in favor of town council prayers, but could’ve been worse.

SCOTUS rules in favor of town council prayers, but could’ve been worse. May 5, 2014 JT Eberhard 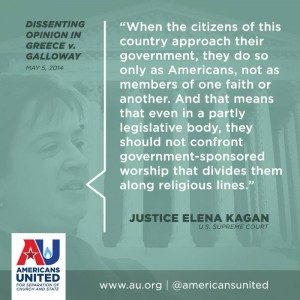 The SCOTUS just ruled in favor of the town of Greece, wrongly in my view.  The Greece city council was opening sessions with prayer, virtually all of which was specifically Christian prayer.  They were sued, it made its way to the Supreme Court, and the SCOTUS just ruled.  Before I get to why it’s not as bad as it could be, let me explain why I think the ruling sucked:

Justice Anthony Kennedy, writing for the majority, said the prayers are ceremonial and in keeping with the nation’s traditions.

“The inclusion of a brief, ceremonial prayer as part of a larger exercise in civic recognition suggests that its purpose and effect are to acknowledge religious leaders and the institutions they represent, rather than to exclude or coerce nonbelievers,” Kennedy said.

Even if the prayers at Greece weren’t sectarian in nature, you’re still giving preference to religious citizens over non-religious citizens.  If a council member opened a session by saying “Remember everybody, there’s no god, so it’s up to us and our own intellect to make sound decisions” there is hardly a Christian in church who wouldn’t think that was a government endorsement of atheism intended to coerce believers, not just a nod to secular leaders.

Justice Elena Kagan, in a dissent for the court’s four liberal justices, said the case differs significantly from the 1983 decision because “Greece’s town meetings involve participation by ordinary citizens, and the invocations given — directly to those citizens — were predominantly sectarian in content.”

A federal appeals court in New York ruled that Greece violated the Constitution by opening nearly every meeting over an 11-year span with prayers that stressed Christianity.

And giving government ground/time to sectarian religion is a violation of the separation of church & state.  The conservative Justices ignored the nature of the prayers, treating them as nebulous and vague, when they knew damn well that the prayers in Greece were going out to Jesus.  They just had an excuse they didn’t view as completely flimsy to rule in favor of their own religion.  It’s unfortunate.

Now for why it’s not as bad as it could’ve been.  First, the ruling only applies very narrowly, so it doesn’t affect Lee v. Weisman.  The ruling also states very explicitly that if evidence is shown that the prayers are beneficial to a particular religion, then the ruling changes.  The ruling also insists the town allow all citizens who ask to give an invocation be allowed equally.

“Equally” here is a funny and misleading term though.  If you’re wanting the government to treat all religions equally, then it needs to put all the Christians on a list and work them in and out of the other faiths.  If 50 Christians apply and 1 Muslim, the Muslim shouldn’t get booted to 51st down the list, otherwise you’re still giving precedence to Christianity.

All in all it’s just a shitty ruling.  It’s a rare legal victory for the theocrats, even if it could’ve been worse.

May 5, 2014 Conservatives love guns and hating Obamacare, how about an ad combining both?
Recent Comments
0 | Leave a Comment
Browse Our Archives
get the latest from
Nonreligious
Sign up for our newsletter
POPULAR AT PATHEOS Nonreligious
1

Joe Rogan Loses Spotify Deal And...
Laughing in Disbelief
Related posts from What Would JT Do?