Hello all! This is Karen Avizur coming to you from sunny and way too hot Orlando! I’m the founder and head of Generation Atheist Orlando on Meetup.com (shameless plug), a new group that I founded when I moved back to Florida after being a member of and helping admin GA in Los Angeles (our sister group).

I jumped at the chance to blog for JT, though I immediately found myself floundering about for something to talk to all of you about. I wanted to start with GA, since it’s pretty much my biggest passion these days (aside from some urban fantasy books I’m trying to get published). GA Orlando is only three months old and currently only at 44 members, but we’ve had some great meet-ups so far, and I really hope for us to become a great resource and community for nearby freethinkers in their 20’s and 30’s.

One of the biggest things I want us to focus on in GA is outreach, because a significantly effective way to reduce discrimination is simply making ourselves known. As most of you know, there are so many young people in this country today that honestly can’t come out to their parents as an atheist for fear of being ostracized or even disowned. Even after many years in this community, it’s frustrating and somewhat strange that I have to keep this at the forefront of our mission, but like the Out Campaign, I want GA to help normalize the idea of atheism. The best way we can do that is to show the rest of the world who we are, to let them know that they know us already, and that they know us as respectable, moral people. And anyone who comes out as an atheist does so with a modicum of risk, but those whose very livelihoods depend on keeping their atheism quiet need the rest of us to step up.

I’m currently in an ongoing battle with an unknown enemy who keeps taking down my Generation Atheist flyers from a Publix public notice board a couple miles north of me. I plan on checking around to find other notice boards (I’ve been told Starbucks is a good possibility) but it’s been two months and I still go back every day to put up a new one. It’s probably a bit too stubborn, but especially after this long, I don’t want to give up. We’re here. We’re not going anywhere. And as long as there’s any discrimination against my community, I don’t want to let it stand when there’s something I can do about it.

That said, I’m dying of curiosity to know who the hell this person is!

Anyway, I’ll leave you with a cute photo. I told my sister I’d make her dogs Internet famous. Here’s a happy Ginger with a bone that she just stole from a disappointed Roxy. 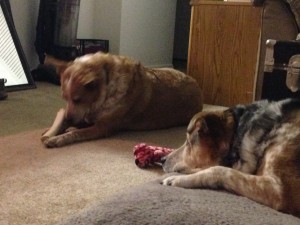 June 24, 2014 Your Morning Happiness: Hammock Huskies and a Proud Scalebaby Mom
Recent Comments
0 | Leave a Comment
Browse Our Archives
get the latest from
Nonreligious
Sign up for our newsletter
POPULAR AT PATHEOS Nonreligious
1