In very first law passed by Congress the founding fathers took god out.

I can’t even get through a day without breaking my own self-imposed ban.  But I’ll try to keep it quick.  Ever wonder what was the first law Congress ever passed?  Well, this was it:

An Act to regulate the Time and Manner of administering certain Oathswas the first law passed by the Congress assembled after the ratification of the U.S. Constitution. It was signed by President George Washington on June 1, 1789, and parts of it remain in effect to this day.

Essentially the law dictated the oath most public officials had to take coming into office.  It was “I, [FIRST NAME] [LAST NAME] do solemnly swear or affirm (as the case may be) that I will support the Constitution of the United States.”  But this was not how it was in some original drafts, at least not entirely:

The oath in the final bill differed from the original proposal by excluding the two clauses mentioning God, as well as the phrase “a Representative of the United States in Congress thereof.”

God was proposed and they intentionally took it out.  This is very strange if our founding fathers intended us to be a Christian nation.

For those interested, you can find the reference and citation to that first Act in the Supreme Court records as part of the evidence submitted by American Atheists in the “In God We Trust” case of a year or two ago, from there, you will find enough information in the citation to find an image of the actual document in the Library of Congress.

Ok, now no more until I have a different last name.  Promise! 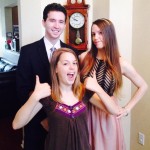 June 24, 2014 NY Court Says, "Stop Sending Your Unvaccinated Kids to School"
Recent Comments
0 | Leave a Comment
Browse Our Archives
get the latest from
Nonreligious
Sign up for our newsletter
POPULAR AT PATHEOS Nonreligious
1