Your Morning Happiness: Hammock Huskies and a Proud Scalebaby Mom

I subscribe to the utoobz channel the following video is from. Their vids are a mix of all around cuteness, every day silliness of the 3 huskies they have, pet product reviews, and fan mail Q&A. Huskies are a misunderstood breed, as the questions they have to often answer repetitively illustrate.

When we first moved to Florida full time,  while walking our Husky we had more than a few people hide in stores until we walked past,  which was always amusing.  I cant even put a number on the amount of times while driving with windows open, husky head hanging out of the window, people at red lights would honk and ask “Is that a WOLF?!?!”.

The particularly goofy one in this vid is Memphis, about a year old….

Adding to the cuteness, commenter here Baby_Raptor (Twitter: @Velvet_Remedy) sent me these cute pics of her “Scalebaby” Deathwing the bearded dragon! I love that he goes for walks with you  Baby_Raptor! Also, you’ll have to let us know in the comments if he actually ate the skittle on top of his head!   I miss playing WOW sometimes, assuming that’s where his name comes from 🙂 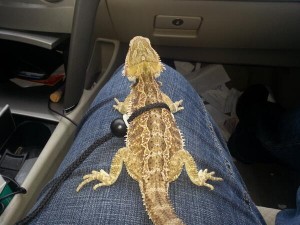 100 years from now people will look back on the “teenage years” of the internet…. The internet that gave us bunnies with pancakes on their heads, and Deathwing the bearded dragon with a skittle on his head, and they will think…. “DAMN, THEY WERE SO MUCH COOLER THAN US!” 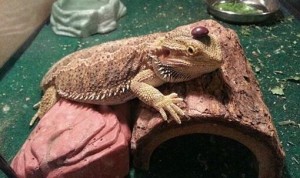 Husky Pack Mission Of The Day*: If you happen to eat out where you are served on… after the meal when the server comes to take away your plates, stop them for a second, look them in the eye and say something nice/how great a job they did. Then tip well.  A 10 second simple act of kindness and recognition can affect that person’s WHOLE DAY!

*Point and laugh at people wearing purple shirts, unless they are serving you

June 25, 2014 I don't think Answers in Genesis quite gets science Pt. 1
Recent Comments
0 | Leave a Comment
Browse Our Archives
get the latest from
Nonreligious
Sign up for our newsletter
POPULAR AT PATHEOS Nonreligious
1

Nonreligious
MORNING HAPPINESS: I steal pets.
What Would JT Do?

Nonreligious
MORNING HAPPINESS: Um...did you know it is petting...
What Would JT Do?

Nonreligious
MORNING HAPPINESS: Knows where the food is, too...
What Would JT Do?

Nonreligious
MORNING HAPPINESS: Maximum derp.
What Would JT Do?
TRENDING AT PATHEOS Nonreligious