Bryan Fischer: stopping men from having sex will stop AIDS. 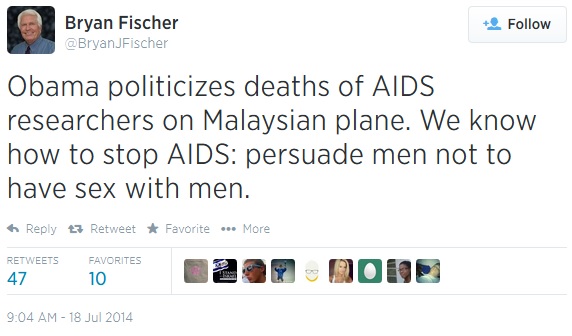 Yeah, Bryan Fischer just can’t stand it when people politicize a tragedy and a disease to suit their pet cause…like he’s doing with this tweet.  “That kettle is totally black!” ~ Bryan Fisher

And who is this “we”?  Surely you’re not referring to all of humanity, most of humanity, or even to the scientific community, because they all know that’s a load of bullshit.  I mean, would you believe that straight people contract AIDS and even children live with the disease, and it has nothing to do with gay men doing each other.

Another reason is due to not having to worry about pregnancy, gay men tend to use condoms less than straight people.  The problem isn’t the sex, it’s the not using condoms.  Is Bryan Fischer arguing for the use of condoms?  Of course not, because that would mean safer sex for fun and Jesus doesn’t like that.  The ironic thing is that the American Psychological Association attributes much of the fault for this to people like Bryan Fischer:

And hey, lesbians get AIDS at a rate far lower than straight people or gay men.  I guess next Fischer will be encouraging everybody to ignore their sexual orientation and become lesbians, right?  Of course not.  It’s about opposing gay people no matter what, not care about AIDS.

Bryan Fischer is such a piece of shit.

July 18, 2014 Thought I had about the Freedom From Religion Foundation.
Recent Comments
0 | Leave a Comment
Browse Our Archives
get the latest from
Nonreligious
Sign up for our newsletter
POPULAR AT PATHEOS Nonreligious
1