Yes, I Can Hold Public Office as An Atheist

Yes, I Can Hold Public Office as An Atheist July 9, 2014 Daniel Moran

For years, the atheist movement has been making the claim that atheists in America can’t hold public office in seven states. 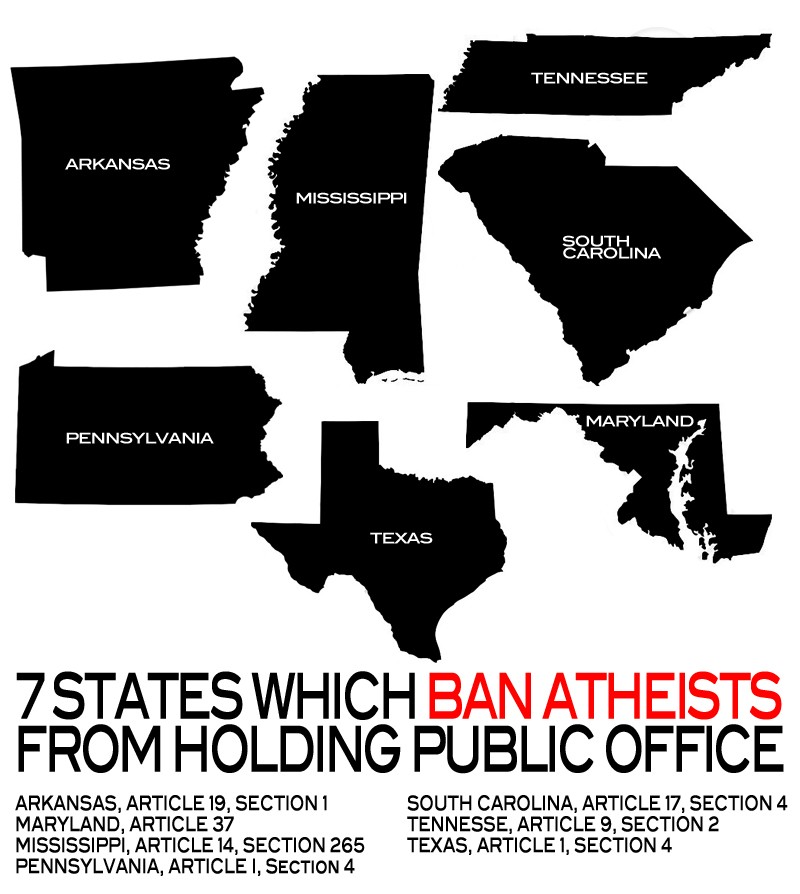 We have almost all seen the graphics and posts people have made decrying this as discriminatory and unjust. The most recognizable might be this one to the right:

Many news outlets keep repeating this claim too, including the Washington Post recently.

So can atheists hold public office?

In Texas, the Constitution states in Article 1, Section 4 (emphasis mine), “No religious test shall ever be required as a qualification to any office, or public trust, in this State; nor shall any one be excluded from holding office on account of his religious sentiments, provided he acknowledge the existence of a Supreme Being.”

The constitutions in these other states have similarly worded provisions. They don’t explicitly ban atheists, just those that don’t believe in or “acknowledge” a god. This would include many Buddhists and other religious people who don’t have gods as part of their religions.

This is where the state of Maryland comes in, and this is where many atheists apparently didn’t get the memo.

In 1961, in the case Torcaso v. Watkins, Maryland’s provision requiring people to proclaim a belief in a god before holding public office was struck down as unconstitutional under the First and Fourteenth Amendments’ rights to religious freedom and equal protection, respectively. These are still technically on the books, but they are not enforceable, and if someone, like Texas, even tried to enforce them, the courts would almost immediately step in and tell them to knock it off.

They were struck down unanimously by the High Court (something that doesn’t happen all too often), yet to this day, many of us still think that atheists are banned from holding public office in Texas and other states. This has led to a self-defeating mentality among atheists that has plagued us for years.

When the Richard Dawkins Foundation for Science and Reason recently linked to my post about my candidacy as an open atheist, I was absolutely ecstatic.

People around the country were taking notice of the campaign. They signed up to volunteer. They donated. Hundreds of dollars were raised for the campaign in just a few hours from that post alone.

However, many people in the comments kept repeating this same old line about how Texas bans atheists from holding public office.

While it was odd all on its own that people didn’t know this was voided back in the 1960’s, it was sad that their comments essentially boiled down to: there’s no point in trying to help him win, since Texas doesn’t allow atheists to hold public office. A few even went further than just the false idea that it’s illegal for me to hold office. Some comments were almost literally: an atheist running in Texas? Fat chance!

This fatalist mentality, especially in the Bible Belt, is what has kept atheists out of politics for years and is holding us back from taking public office and making a difference for our communities and for our country.

It’s not discrimination that has done this to us. It’s allowing ourselves to be fooled into thinking we can’t run and can’t win. We can run, and we can most certainly win.

The religious right probably jumps for joy when they see another atheist believe they can’t win an election or even hold office, because it means more of us aren’t in the way of their agenda to throw us back into the Dark Ages.

While polls show some Americans will not vote for an atheist for President, there are atheists who have and still hold public office all across the United States, and these are just a few of them:

State Sen. Ernie Chambers of Nebraska, who (in)famously “sued God.” Christopher Schaeffer was recently sworn into office as a councilmember of the town of Pomfret, New York with a colander on his head. Rep. Sean Faircloth was in the Maine House of Representatives for 6 years.

And, of course, there is Rep. Pete Stark of California, who was the first open atheist in Congress and was in office for 20 years. Before there were Muslims, Hindus, and Buddhists in Congress, there were atheists.

We are not banned from holding public office, and we are not unelectable. If you, as an atheist, think we are somehow unelectable, then you’re part of the problem.

PS: I would like it stated simply for the record that the vast majority of these elected officials are Democrats. Just putting that out there.

July 9, 2014 Think of a Color that Doesn't Exist
Recent Comments
0 | Leave a Comment
Browse Our Archives
get the latest from
Nonreligious
Sign up for our newsletter
POPULAR AT PATHEOS Nonreligious
1

'Joseph Masturbated In The Corner, Too'...
Laughing in Disbelief
Related posts from What Would JT Do?

Massachusetts Construction Worker Dies From Eating Black Licorice
This all too real story made me thank my fictitious god I...

Peaceful Transfer, Courts, Cheating and Lindsey Graham. Sweet...
Reporter: Will you commit to making sure that is a peaceful transferral...

Trump: Religious Supporters and Racism
By Linda LaScola, Editor As many readers here know from their own...

Benediction
Support Blinky & Sal on Patreon and check out Barb on Webtoon.
view all Nonreligious blogs
What Are Your Thoughts?leave a comment
Copyright 2008-2020, Patheos. All rights reserved.