The city of Mobile, Alabama is considering putting the words “In God We Trust” on the city’s administration building.  You may wonder what kind of message that sends to any atheists walking its halls.  They might ask “Are we atheists a part of “we”?”  Well, if you don’t trust in god, apparently not.

So Amanda Scott went and spoke before the County Commission, suggesting a plaque giving note to atheists as Americans as well be put in the building to avoid confusion that the government is excluding members of the community not convinced a guy didn’t rise from the dead 2,000 years ago.  The Commission, of course, didn’t agree.  It’s Alabama, what can you do?

But then a local new station launched a poll about Amanda’s position, and the Christian love came out in abundance.

What are your thoughts on a local woman who wants to see an Athiest motto placed next to the words “In God We Trust” at Government Plaza?

Hemant describes how one correctional officer from the freaking city said that Amanda should be murdered:

It was a horrible question, and the response was exactly what you think it’d be: A lot of awful comments directed at her… and no shortage of threats.

In fact, one of the threats (since deleted) outright called for Amanda’s murder:

It’s hard to make out that icon. So let me enlarge it for you: 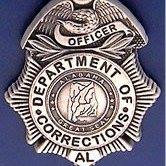 It’s a symbol for the Alabama Department of Corrections, where Bennie O. Ashby, who called for Amanda to be shot, works as a correctional officer.

First off, arguing for equal treatment under the United States government is about as far from treason as you can get.

Second, when was the morally influencing force of Christianity going to get around to making this guy not a violent maniac?

Third, that violent maniac has a badge?  Fucking Alabama.

This is why legal battles must be fought by groups like the FFRF: because so many Christians can’t be trusted to do what is right of their own, supposedly morally superior accord.  The odds that atheists will receive fair treatment at the hands of Christians in power is about as close to zero as the laws of physics allow.  Conversely, whenever an atheist asks for equal treatment, to be included in the royal “We” of the United States population, the odds that they will receive harassment and threats of violence and death from people who claim Jesus is the most important thing in their lives is roughly the same as the sun rising tomorrow morning.

Whatever noble ideals you have of Christianity, this is the reality of it in practice.

So what can be done?  Complain to the police?  Go up the chain of command because those in charge of the police probably don’t want to vest that person with a badge if he thinks people should be killed for wanting equal representation from their own fucking government?  Ha!  This is Alabama.  Hemant already tried:

I sent them an email last Wednesday explaining the whole story and requesting a response. It’s been nearly a week and I haven’t heard back. I also sent a message to Ashby himself last night asking if he had anything to say about his threat… he hasn’t written back either. That’s why I’m posting this now.

Hey atheist in Alabama, someone just threatened your life.  What are you gonna do, call the police?  A corrections officer made the damn threat!  Well, you could call the other police.  Well, they don’t seem interested.  Why don’t you pray to god, maybe he’ll help.

Disgusting.  If the lot of them had half the integrity and moral sense of Amanda Scott, I would have less blog content and Alabama wouldn’t be such an eyesore.  As it stands, all they have is Jesus, which is a poor substitute for integrity and morality.

Christians Panic After Biden Signs Executive...
Progressive Secular Humanist
Related posts from What Would JT Do?