Kevin Sorbo played the ridiculous caricature of an atheist foil in the movie God’s Not Dead (which has been torn apart by plenty, but none so thoroughly as Dan Fincke).  Sorbo just took to the Conservative Tribune to rant on atheists.

It turns out that Kevin Sorbo is definitely not a philosopher, despite playing a ham-fisted character who was supposed to be a philosopher on TV.  Father (who has a philosophy degree) read the article and had some things to say…

1. “This is know as the freedom OF religion, but atheists have interpreted it as freedom FROM religion, which it isn’t.” It is in fact commonly referred to as freedom of religion. However, the First Amendment refers to neither freedom of religion nor freedom from religion. Read it, dummy. The Supreme Court—the ones with the legal authority to make the call— has decided that freedom of religion includes freedom from religion, and only a dolt would fail to recognize that. How can you have the freedom of your Christian religion if you don’t also have freedom FROM Islam? Duh.2. “Atheist groups seem to attack religion, especially Christianity, wherever they can find it. They have demanded that a small town high school football program stop using their field for prayer meetings….”This isn’t “attacking religion”, the straw man this clown created to obfuscate that this is breaking the law. It is a violation of the established jurisprudence of the Constitutional separation of church and state. most atheists don’t give a shit about your religion; we DO insist you don’t break the law and use the state as a proselytization and indoctrination arm of your religion.3. “….., and attacked Wisconsin Governor Scott Walker for Tweeting a Bible verse.” If you click on the link to this, you find “When Governor Scott Walker tweeted a scriptural reference last Sunday from his gubernatorial twitter account…..” Church state violation again. It’s fine from his PERSONAL account, but not from the STATE account. The state has no business paying for an account for him to twitter bible verses. If he wants to promote religion, he should do it on his own dime.4. “Atheists have tried to get the phrase “In God We Trust” removed from US currency, sought to remove the 9/11 Memorial cross from Ground Zero,…” Yep. Some have….but, not many. You don’t get to blame all atheists for this unless we get to blame all Christians for the actions of the Westboro Baptists or FLDS.

5. “…..and have now teamed up with progressives in the IRS to “monitor” (target) Christians churches for their conservative messages that are based on Biblical teachings.” This is a LIE. A flat, plain falsehood. Since 1954 a requirement for non-profits to have tax free status has been to not endorse political candidates. This isn’t about “biblical teachings”, it is about pastors endorsing and promoting political candidates from the pulpit in violation of established law. Isn’t it disgusting when the Christians who claim the moral high ground purposely lie and misrepresent like this? Hypocrites.6. “This laser-like focus and constant assault on Christianity by atheists has left actor Kevin Sorbo wondering why atheists are so “offended by something they don’t believe in.” Who said atheists are “offended” by religion” We are “offended” by the vile actions of some Christians who try to justify them with religious excuses, such as their assault on gay American citizens. We are “offended” by their unpatriotic spitting upon the established jurisprudence of the Constitutional separation of church and state, along with their nonstop efforts to tear down the wall of separation. And so on. To label this type of thing as an assault on “something they don’t believe in” is building a straw man to attack instead of addressing real issues. 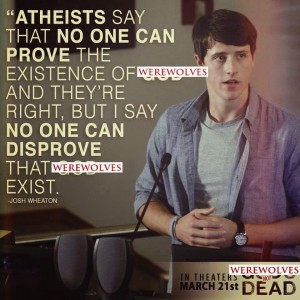 7. “‘Wow, how do you get so angry about something you don’t believe in?’” Actions spring from beliefs. When your beliefs lead you to treat women and gays as second class citizens in their own country, people should get mad. When your beliefs lead you to want to take evolution out of science classes and insert the non-science of creationism, people should get mad. When your beliefs lead you to break the law, people should get mad. When you try to use your beliefs to run my life, I get mad as Hell. Rightfully so. We aren’t mad about “something we don’t believe in”, we are mad about what you DO.8. “Sorbo finds it weird that atheists spend so much time and effort going after things like simple nativity scenes, particularly when they claim such things are meaningless and hold no merit.’ Violation of church and state. What a sorry excuse to say, “We should be able to break the law and you should just STFU when we do. Ugh.He no doubt “finds it weird” that we think Christians shouldn’t always be allowed to break the law and to use the government to promote their privileged religion.9. “They’re offended by something they don’t believe in….” I repeat: we aren’t “offended” by what you believe in, we’re offended by what you DO. This is a straw man logical fallacy.

10. ““Well, it offends about 90 percent of people of the country that they take the nativity scenes down….” It isn’t about being offended, it IS about BREAKING THE LAW. Another straw man.11. “… but apparently, the majority doesn’t have a voice in this country anymore.” Oh, de po’, po’, mistreated majority! Gag me. Of course the majority has a voice. However, the being a majority doesn’t allow you to do unconstitutional and illegal stuff, and since you demand special privilege and that the laws don’t apply to you, you’re throwing a tantrum and whining. This makes me sick.12. “At the end of the movie, we show 37 court cases — we could’ve shown many more — in the closing credits of major universities being sued by students, because they’re being persecuted purely for having a faith in God.” How many are legitimate cases they have a chance of winning? Want to compare it to the number of cases of church/state separation violation? I also question his use of “persecuted”. Not getting your way every time is a far cry from persecution.The irony and hypocrisy here are breathtaking. When Christians (maybe) don’t get their way, it is persecution. When they don’t get to break the law and use the government to force their religion onto others, they are being persecuted there, also. I think they are desperate to claim a piece of victimhood pie so that when dump on others they can claim they are persecuted too, so it’s just too bad for the dumpee.13. “Kevin Sorbo makes a very valid point, ….” NO, he doesn’t. He is full of shit.14. “….. in that atheists do spend an inordinate amount of time fighting against something they claim to not care about.” Who claims not to care about living in a theocracy, equal rights for gay people and women, separation of church and state, the rule of law, and so on. Additionally, we have the right to defend and promote what we believe just as much as the proselytizers have to promote their belief. The difference is that they can’t stand for us to have that equality.15. “…as American citizens have the First Amendment protected right to freely express themselves and their religion, and that includes while in public.” Of course they do, and no one is stopping them as long as they don’t break the law. They can express their religious beliefs on the streets, in their car, in their yard, in their churches, and just damn near everywhere. That isn’t what they want, though. They want to use the state to lead their prayers in schools. They want tax dollars to fund their outreach and anti-science teachings. They want to use state properties to promote their religion with creches while denying those same properties to other beliefs.16. “….Furthermore, when atheists begin to show some consistency in going after Jewish and Islamic groups, instead of just Christian.” I think we “go after” them to the same extent they give us grief. In a 70% Christian population country, one where the “nones” outnumber the Jews and Muslims put together, I find amazingly enough that we don’t seem to have a problem with those two forcing their religion onto us or using the government as their proselytization and enforcement arm or doing their best to turn our secular nation into a theocracy. What a pathetic excuse to claim more persecution.17. “Until then, live and let live, worship and let worship, however one should choose to do so.” Common ground at last, so long as “however one should choose to do so” obeys the law and keeps itself out of the government. You might also note the hypocrisy of “however one should choose to do so’ coupled with what they claim in #1 above, which is that atheists don’t get freedom FROM religion under the constitution. Every Christian should be ashamed by the two-faced hypocrisy, the falsehoods, the poor-mouthing, the misinformation, and the logical fallacies which compose this steamy pile of manure of an article.
Previous Post

August 17, 2014 REMINDER: I will be on the Atheist Analysis podcast TONIGHT.
Recent Comments
0 | Leave a Comment
Browse Our Archives
Follow Us!