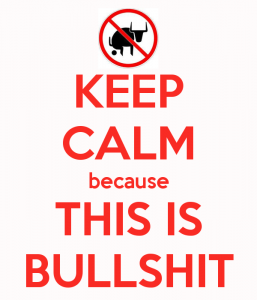 Matt Staver is the head of Liberty Counsel and dean of the Liberty University School of Law, and he really doesn’t like the idea of marriage equality.  In a Radio America interview yesterday he said that Christians and Republicans who stay silent on the subject are just like those who gave their tacit consent in Nazi Germany:

Yes, in Nazi Germany people should have spoken up for the oppressed minority.  And, according to Matt Staver, if people don’t contribute to the oppression of a minority here in the United States, they’re just like the people who failed to protect the minority in another time in another country.  Because logic.

As for a moral imperative for the dignity of human beings, what can mean more to human dignity than letting them choose the consenting adult they marry?  It would seem to me that telling a person that you get to control their love/sex life would infringe upon human dignity, not the other way around.

“In world history, even when you look at the Greeks and how promiscuous they were, you only have fourteen years outside of the United States and ten years in the United States with this dangerous experiment, so I think no matter what the courts do, you can’t change what is reality, objectively so, male and female,” he added.

If you think promiscuity was unique to ancient Greece, you’re a tad naive, Matt.

And what’s with this time table?  Are you suggesting that gay people making each other happy for the rest of their lives has some deleterious effect on whole countries?  By what mechanism does this occur?  When two women kiss, do unicorns die?

We can actually look at other countries who have legalized marriage equality to see if Matt’s dire predictions have occurred.  In 2001 the Netherlands became the first country to make same-sex marriage legal.  Have there been any adverse effects?  Well, to this day the Netherlands has one of the highest quality of life ratings in the entire world…so I’d have to say that Matt Staver’s dire warnings were horseshit.

Next was Belgium in 2003, and they’re also doing better than most other countries on the planet.

Belgium performs well in many measures of well-being, as shown by the fact that it ranks among the top ten countries in several topics in the Better Life Index.

Meanwhile countries that make homosexuality a crime, like Uganda, are the ones that are often crumbling as a nation or otherwise impoverished.  Based on what we can look at with our own fucking eyes, nobody should be listening to Matt Staver try to scare us into opposing real, genuine love.  But since when has evidence ever made a dent in his type?  As long as some guy in a suit who claims to be carrying god’s message says countries will melt if gay people are permitted the same rights as everyone else, that’s usually good enough.

August 14, 2014 On the idea that Robin Williams' problem was lack of Jesus.
Recent Comments
0 | Leave a Comment
"Jesus is Lord. The fool has said in his heart 'there is no God." We ..."
Mark Frank Turek fears me. Also he ..."
"How about transgender kids being denied the right to play sports, and conservative Republicans banning ..."
Joann 40 harmful effects of Christianity.
"You seem moronic and infantile"
Christopher Mankey Frank Turek fears me. Also he ..."
"Don't You Lot tire of making this Same Accusation? Its just Dogma, something You deny ..."
skwills Thoughts on the soup kitchen that ..."
Browse Our Archives
Related posts from What Would JT Do?