Religious discrimination in the NFL needs to go.

So last night the Kansas City Chiefs sportsed way harder than the New England Patriots.  In that game Chiefs safety Husain Abdullah intercepted a pass and ran it back for a touchdown.  Afterward Abdullah, a devout Muslim, knelt in prayer:

For this, Abdullah was flagged for excessive celebration and may even be fined for it.  Look, I loathe Islam as much as the next rationalist.  And while I think this is silly, it’s certainly no sillier (and no more offensive or taunting) than this: 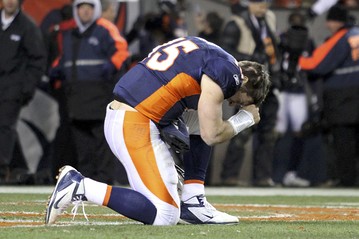 Don’t get me wrong, I think public prayer in sports is ridiculous for a few reasons:

1.  If you’re thanking god for helping you score a touchdown (after you put in a lifetime of work training) while he’s overlooking people who starve, then you only care about yourself.

2.  The guy on the other team prayed too.  It’s not that god loves one of you more, it’s that every game has to have a winner and a loser.

However, as long as people are determined to partake of these public displays of piety, the NFL shouldn’t go apeshit for the the Christian prayer and penalize the Islamic one.  By allowing Tebow to pray whenever he completed a pass (which, in his defense, was a miracle) you opened the door to Muslims praying whenever they did well in games.  The NFL ought to be fair in allowing religious expression.

UPDATE:  The NFL has admitted the penalty on Abdullah was wrong.  Good on ’em. 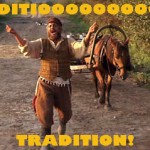 Jill Rodrigues Breaking Ohio's Mandatory Stay...
No Longer Quivering
Related posts from What Would JT Do?