Rebecca Hamilton: “Critics of Christianity don’t help those in need.”

Rebecca Hamilton has hit an all-time low, giving shark shit at the bottom of the ocean a run for its money in terms of lowness.  She did it in a post titled “The Difference is Jesus: Christian Medical Missions in India.”

Christians, unlike their critics, build hospitals and schools, go on missions to help those in need where help is needed.  Christians donate massive amounts of money to aid those in need. They run toward disasters, rather than away from them, to give aid and comfort.

These people were not paid for their efforts. No one asked them to do it. They simply responded to need because that is what Our Lord told them to do.

In all these things, the difference is Jesus.

First, there are no hospitals with “atheism” in the name for the same reason there are no hospitals built in honor of not believing in unicorns – people don’t generally organize around things they don’t believe in.  But if you think that atheists don’t donate to hospitals, work at hospitals, volunteer at hospitals, etc., you’re missing the forest for the trees.  You’re more interested in a religious group using the hospital to advertise their religion by slapping the word “Catholic” or a cross on it than the people from all religious beliefs (and lack thereof) who are putting in effort and expertise to make people well.  Way to go, Becky.  You win the shallowest blogger of the week award once again.

It should also be noted that the whole reason hospitals exist is because god presumably in creating the universe thought cancer, AIDS, and all other manner of illnesses afflicting men, women, and children alike were a swell idea.  It should also be noted that hospitals, even religious hospitals, exist as a monument to the fact that god does not answer prayers (if he did, we wouldn’t need doctors).  Literally the only reason people go to hospitals is because prayer does not work.  Perhaps the big ass crosses aren’t slapped on so many hospitals for advertisement so much as for irony.

And how dare she say that Christianity’s critics don’t help those in need?   Two weeks ago I raised $1,329 on this blog for children’s miracle network hospitals.  Just last week the Kansas City Atheists collected coats for the needy.  Tons of atheist groups around the country do this!  We’re just not big on advertising it because our priority is charity, not making sure everybody knows we think we’re the sole occupants of the moral high ground (probably because we don’t think that, unlike our critic at Public Catholic).  We even go across the pond to help the needy, except we don’t call these trips “missions” because our goal is 100% to alleviate suffering, not split between alleviating suffering and capitalizing on people’s desperation to indulge the self-interest of our religion by proselytizing to the destitute and sick.

I mean, just think for a moment if the Catholic Church wasn’t so invested in gilded halls and gold-adorned thrones for its leader?

Likewise with charity.  The moment money is spent on bibles (or lawsuits because you protected yet another priest who raped a child, or marble halls, or gold sewn into ornate robes) rather than food or coats; the moment time is applied to converting instead of to healing, the difference of Jesus is felt: it has then made someone less good at making the world better.

Atheists deal with none of that in our charitable efforts.  In fact, when it comes to raising money for pure goodness in the world (not time divided between goodness and trying to convert people), you’ll find that all of a sudden Catholics don’t do so hot.  Take micro-loans on Kiva, where Team Flying Spaghetti Monster is currently above every other religious denomination:

Team FSM has reached $2 Million in loans on the micro-lending site Kiva. We’re now the top-lending religious congregation on Kiva, above the Buddhists, Catholics, Muslims, and — especially pleasing to me – above the Mormons, who we’ve been in a friendly competition with for years. Congratulations everyone! 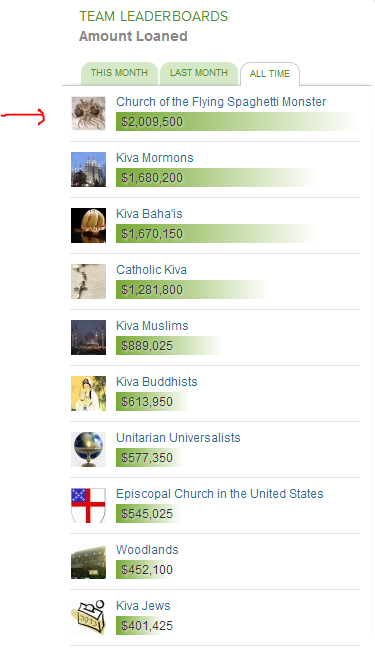 But charity used to slide in evangelism?  Shoot, Catholics love that (see Catholic iconography on hospitals which employ secular treatments conceived by mortal minds).  It’s also worth noting that the atheist team crushes all religious denominations.  Their tally is $17,766,025.

The same is true of religious hospitals that won’t perform procedures that conflict with their religious dogma.  Such hospitals are necessarily less good at healing the sick than a hospital that is first dedicated to healing the sick, with any religious concerns coming after that.

Think I’m joking about how faith often hinders the charitable efforts of believers?  Recall last Thanksgiving when the Kansas City Atheist Coalition, which had worked with the Kansas City Rescue Mission in previous years delivering meals to the needy, was booted from this effort because the Rescue Mission wanted to focus more on proselytizing.  That’s right, they lowered their volunteer base significantly and made themselves less effective as a charity because, well, Jesus was the difference.  Similar examples paint the holidays every year.

And Becky is at least honest about one thing: Catholics and other Christians do it “because that is what our lord told them to do.”  Who says that and thinks it makes them better than atheists (or any critic of Christianity)?  By that logic the kid who shares his ice cream because he thinks Santa will reward him is just as moral as the kid who shares his ice cream out of pure kindness.  Atheists don’t have to be commanded to be kind to our neighbors or to work to alleviate suffering in the world, we do it simply because we are good people.  We need no reward, we have no hell to avoid, we just care.  It’s hard to claim the moral high ground by doing good (and doing it less effectively) because you think you were ordered to do it.  For us the difference is compassion.  Without that, you’ll find that belief in Jesus doesn’t do shit.

This is not to take away from the charitable efforts of religious people.  A Christian handing an orange to a starving child has the same effect as an atheist doing it.  In fact, I’ll be way kinder than Hamilton (which isn’t hard): many religious people value charity over proselytizing.  Many do it out of compassion, despite Becky’s assertion that it’s because they’re told to.  And it’s great!  It doesn’t pick my pocket as an atheist to acknowledge that other people do good out of compassion.  I celebrate it (even if I don’t think it makes their religious beliefs any more likely to be true)!  This is why I would never dream of claiming that atheists hold the deeds to compassion.  But to assert that critics of Christianity do not put out the effort to make a better world is disgusting, wrong, and reveals that the self-importance being able to brag is more important to Rebecca Hamilton than good deeds for the sake of good deeds, or anything close to resembling the truth for that matter.

Seriously, if you’re listening to someone who says the critics of Christianity don’t do good in the world for lectures on morality or for pointers on how to be a good person then your standards can be measured in Planck units.

(And for those who enjoy watching Hamilton’s false claims and double standards get exposed, Dan Arel had a really great one from earlier this week)

November 3, 2014 John Oliver on the elections that really matter, and a quick guide for KS and MO voting.
Recent Comments
0 | Leave a Comment
Browse Our Archives
get the latest from
Nonreligious
Sign up for our newsletter
POPULAR AT PATHEOS Nonreligious
1

Children of God cult member jailed for sexually...
DEREK Lincoln, above, was handed an 11 year and six months sentence...
view all Nonreligious blogs
What Are Your Thoughts?leave a comment
Copyright 2008-2020, Patheos. All rights reserved.