The Qur’an is true. We can all go home now. 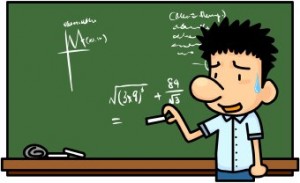 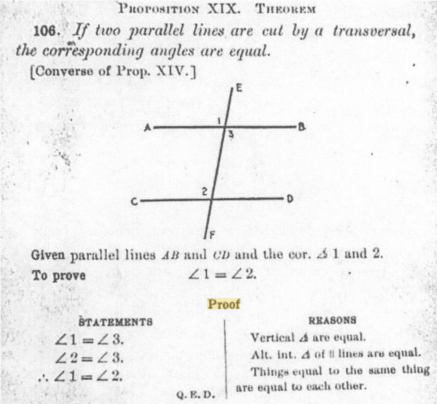 For those of us who took geometry, the sample to the left may seem creepily familiar. I actually enjoyed that class. I was one of two sophomores in a class of juniors, where the teacher got so frustrated with everyone else, he was threatening to just assign and grade homework for the rest of the year, instead of trying to teach them. Go America!

Whenever I hear a Christian talk about mathematical proofs for God, I can only assume they either didn’t take geometry class, or suppressed the memory of it…. or that, once again, they’re using a phrase that doesn’t mean what the rest of us thinks it means.

In Science-world, “proof” or “prove” typically means “demonstration beyond a reasonable doubt”. It’s not an absolute assertion, where unlike in math, it is.

I was curious about mathematical “proofs” for God, and came across this site. I didn’t realize right away that it’s a “mathematical proof” for the God of the Quran, and not the Bible.

It’s always striking to me how similar Islamic and Christian arguments are. Yet, they never seem to use those arguments on each other. They’re always directed at the atheist(s) in the room. Having both the Christian and the Muslim trying to use Pascal’s Wager on each other would be comedic.

As such, the “proof” this site provides may seem familiar.

What does the author have for us?

The first physical evidence proving the existence of GOD.

Strangely, the author never provides and physical evidence… unless what the author means is “the math is written in a physical book.”

This marks the advent of a new era in religion; an era where FAITH is no longer needed. There is no need to “believe,” when one “knows.” People of the past generations were required to believe in God, and uphold His commandments ON FAITH. With the advent of the physical evidence reported in this book, we no longer believe that God exists; we KNOW that God exists.

I won’t derail on the definitions of words… there’s a valid definition of “believe” that is neither “faith”, nor mutually exclusive with “knowledge”. I’m curious why faith was required in the past, but not now. Further, the author clearly accepts the Old Testament/Torah, where miracles were supposedly a dime-a-dozen, but not so today… so the opposite assertion could be made.

Math is a useful tool in science, but it’s hardly “the ultimate”… in fact, math acts more as a guide in science than a “proof”. The “proof” in science comes from empirical demonstration.

Math indicated to us that the concept of black holes should exist. The scientific consensus wasn’t reached until we gathered sufficient empirical confirmation. The applied math is only as good as our modelling of reality, which depends on our ability to gather empirical data.

The introduction contains more assertions, but I’ll get back to that after the “proof.”

The author begins, emphasis mine:

Simple to Understand, Impossible to Imitate
God informs us in Chapter 74 that the authenticity of the Quran will be proven by the number 19. Verse 35 describes this 19-based mathematical code as “One of the great miracles”:

… and the reader is them deluged by a whole bunch of instances of arbitrarily chosen things adding up to multiples of 19. Here’s a sampling:

That’s basically what the “proof” is all about; it’s so unlike what we find in actual mathematical proofs. At best, they’ve “mathematically proven” that there’s a lot of ways things become multiples of 19 in the book.

Further, in my emphasized bit before… the argument is circular. The Quran says the authenticity will be proven by the number 19, and we know that assertion is true because Quran says so.

I fiddled for a bit with the idea to see if I could verify some of the assertions, but I have no clue about Arabic. The author talks a lot about different letters showing up at different instance counts… but I don’t even know whether Arabic has uppercase and lowercase letters. Do online Muslims posts long rantish comments in Arabic, with random words capitalized?

For the sake of argument, I’ll just grant that all the 19 stuff the author asserts is accurate.

What is being proved?

God. You know, the usual. Though, what’s the connection between a mathematical anomaly in a book, and the textual assertions being true?

Going back to the introduction, this is what the author says:

… the evidence comes in the form of an extremely intricate code. Thus, every word, indeed every letter in Quran is placed in accordance with a mathematical design that is clearly beyond human ability.

How is it clearly beyond human ability? Later, he points out that this was written before we had formal math:

This mathematical system is easily superhuman. This is especially awesome in light of the fact that (1) no person was aware of its existence until recently and (2) it was revealed during the Dark Ages of Arabia before the existence of the modern number system.

… but multiplication and division of sets isn’t intuitively inaccessible. Division is just saying “how many times will 12 dozen eggs be taken out of 144 eggs?” We don’t need computers or modern math for that.

Not only does the evidence prove the authenticity and perfect preservation of the Qur’an, but it also confirms the miracles of previous messengers including Noah, Abraham, Moses, David, and Jesus.

Wait, how does it do that? How do you get from a book that has a bunch of 19s, to some other book that asserts Moses parted the Red Sea, and therefore that’s true?

It all hinges on his inexplicable notion that the Quran has been “authenticated”… but that’s not a mathematical question. That’s a question of logic, and the standards of evidence. Right off the bat, we can identify a few logical fallacies, such as circular reasoning (the book proving the book), and an association fallacy (one thing is true in the book, so other things in the book must be true).

Non-sequiturs are flying at us left and right.

Don’t get me wrong… if all those assertions about the value 19 showing up in different ways is true, that’s interesting and kind of cool, but it’s just an application of Numerology. It might be a phenomenon that warrants further investigation to discover its source.

Once again the apologist is starting with an effect, and blithely asserting a cause that’s otherwise unprecedented in reality. I can think of several possibilities, and I’ll say now that the idea that this is “superhuman”, and is beyond us to create mathematical relationships in a book is dismissed as unjustified. The author asserts it, trying to preemptively block us from perusing that possibility.

Some of these are more absurd than others. There’s multiple potential causes for the phenomenon, and the apologist, yet again, has simply chosen the desired cause, over the others, that is then “proved”. Once again, they’ve chosen the single most unevidenced, unprecedented, undemonstrated, unproven and most reality-contradicting possibility in the list – God. Even the concept of aliens is less absurd. Humanity exists on a planet… that’s one example of an intelligent species living in this universe. We have zero examples of a god…. unless one broadens the scope of “God” such that the Pharaohs qualify. They didn’t create any universes, though.

However, upon reviewing the evidence presented here, and examining the appropriate narrations, the reader will be as positively certain as an eyewitness.

No, I’m sorry, that didn’t happen. In fact, I found it quite silly.

What the author has is something interesting. The next step is to determine a model for the causal mechanism, and empirically confirm it. Then, he or she may have something to talk about.

Nonreligious
Your Saturday Morning Disgust
What Would JT Do?

Nonreligious
Solipsism and Atheism
What Would JT Do?
TRENDING AT PATHEOS Nonreligious