Unitarian Universalist church in my hometown has windows shot out and threatening letter left. [UPDATED]

The Unitarian Universalist church in my hometown of Mountain Home, Arkansas recently published a letter in the local paper letting the community know that they welcome everyone at their church regardless of race, religion, or sexual orientation.

The reaction?  The church had its windows shot out one night and the church’s leader received this note: 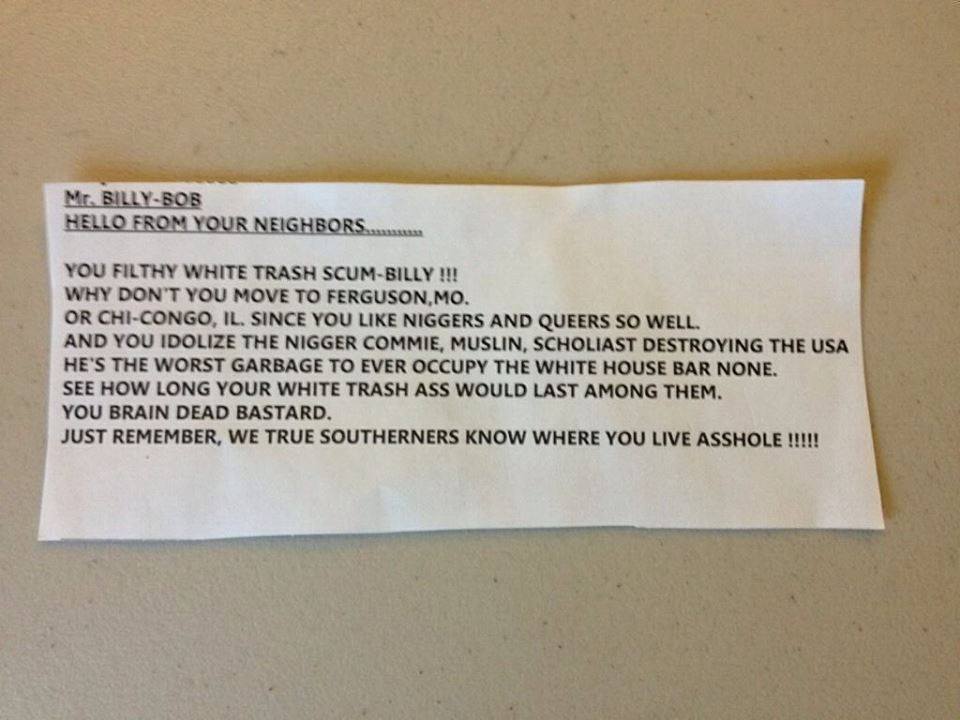 I come from a VERY Christian area (there’s a four-way stop just up the road from my parents’ house with a different church on three of the corners).  Far from being a moralizing influence, it seems the idea of a religion that doesn’t hate the same people the Old Testament tells lots of the locals to hate catalyzed this action.

In a letter to the Baxter Bulletin church leader Bill Rhodes says he doesn’t believe the two incidents, the windows being shot and the letter he received, are related:

“I’ve never mentioned my faith when writing a letter to the editor,” Rhodes said. “It would be difficult for someone to have connected me to the church. I just don’t feel like the letter and the window are related at all.”

I know from talking to other residents (it being my home town and all) that not everybody agrees with Rhodes, but it’s his church.  However, if he’s right, I think that conflicts with something else he says in the article:

“That note is just one misguided person, it doesn’t represent the way people around here think,” Rhodes said. “This is a great place to live with great people who are kind.”

While there are certainly kind people in Mountain Home, it is also home to large amounts of Christian fervor that often expresses itself negatively to anybody in the out group.  In fact, if the windows of the UU church being shot and the letter are separate incidences, you now have two people (at least) trying to intimidate those who have the audacity to establish a non-Christian church.  Who knows how many more give their tacit approval.

To bolster my argument here I’d draw your attention to Mickey Pendergrass, the County Judge who has been less than accommodating to non-Christians who wish to put a display up on at the courthouse (next to the nativity scene depicting the birth of Jesus).

Pendergrass gave his reasons in an interview with the Baxter Bulletin:

Pendergrass said Thursday he will take no action in response to the letter without consultation from legal representatives for the county and the Association of Arkansas Counties. He said Baxter County is apparently among a declining number of counties that permit nativity scene displays on publicly-owned property.

The judge said he rejected a citizen request for the display of a “Happy Winter Solstice” banner on the courthouse grounds because he believed making the courthouse available for any and all requests for occasional exhibits would result in “hundreds” of displays.

Yes, representing all beliefs equally could result in hundreds of requests (unless, of course, you decided to represent everybody equally by allowing none of it).  Fortunately, the answer to a looming inconvenience is not for representatives of the government to give preferential treatment to one religion over others.  You can bet the people wanting to erect a monument to the birth of Jesus didn’t have to get lawyers involved for the privilege.  Are they more entitled to government space than the other citizens of Mountain Home?  By Judge Pendergrass’ behavior, you’d think so.

The option of representing all beliefs equally by allowing all or forbidding all is why, by the Judge’s admission, very few counties still put nativity scenes on government property.

Anyway, I don’t bring this up to change the subject.  I bring it up to highlight the community’s reaction.  Go on and take a look. Go on.  I’ll wait.  I’m sure Cranston, Rhode Island is also full of kind people.  But the ordeal of Jessica Ahlquist showed that it’s also the lair of a frothing zealotry that makes any challenge to the Christian hegemony a danger to a person’s place in the community, if not their livelihood.  Mountain Home, AR, in the belly of the South, is even less tolerant of non-Christians staking out a place in the community – even if there are perfectly nice people in the community as well.

That is what’s so sad about the events at the UU church – they speak to the bigger problem.

November 12, 2014 We landed a probe on a comet!
Recent Comments
0 | Leave a Comment
Browse Our Archives
Related posts from What Would JT Do?